Don't You Have Something Better To Do? 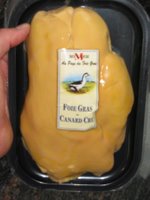 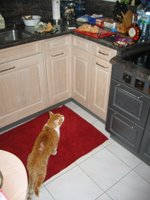 I read this article recently about a Chicago alderman who has proposed to make Chicago the first U.S. city to ban the sale of foie gras. Umm...shouldn't you be paying attention to crime, or gangs, or something a little more important than something that is being served up in fancy restaurants and that people have been eating for over 5,000 years?
We eat foie gras. As a matter of fact, I bought some today. We're going to serve it up as an appetizer for Simon and Rosemarie when they come over for dinner tomorrow night. While I was cleaning the foie gras, I had to step out of the room for a minute. It looks like I returned to the kitchen just in the nick of time!
If you don't want to eat it, or any other meat for that matter, don't eat it. If you don't like that a restaurant has foie gras on its menu, then don't go to that restaurant. That's your right. The laws of supply and demand will always reign supreme. However, what I really object to is letting aldermen - who are more than likely not experts on the subject - choose what people can and can not eat. I think it's all just a ridiculous waste of time.
Hudson Valley Foie Gras, the largest U.S. producer, produces more than 220 tons (about 75% of the U.S. market) per year. The portion size of foie gras is rarely more than a few ounces. Clearly somebody's eating the stuff.
Posted by The Big Finn at 11/18/2005 08:30:00 AM

Ah King almost getting into trouble. I see you are drinking Volvic water this week. I'd agree with ya on the foie Gras, worry about other things in the world instead of this.

I love the picture of King supervising the kitchen situation.

They've cleared out all of the crime in Chicago now.

Foie Gras does kill people....albeit very slowly so it's going to take the Aldermen a long time to combat it.