EXACTLY As I Planned!! 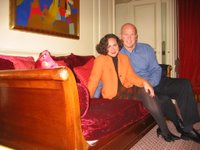 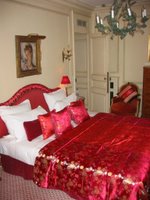 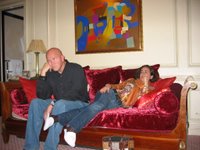 Even though the media was reporting as if France as we know it was coming to end, we decided to go to Paris as planned. And...I'm glad we did. I told Mrs. TBF before we left that tourists would be canceling their hotel reservations in droves, and we'd probably end up getting an upgrade. They did, and we did!
We checked in at our hotel early Friday afternoon (it was actually a national holiday in France), and we were informed that we had received an upgrade to a suite! Here are a couple of pictures of our room at the Hotel Lancaster. It was our fourth time at this hotel, and we've NEVER had a bad experience. I highly recommend it. Just tell 'em The Big Finn sent you. Ummmm....on second thought, don't tell them that. They'll just stare at you and say... "Who?". But, both Mrs. TBF and I highly recommend this hotel if you're going to Paris and in the mood to splurge. Come on...do it...you know you're worth it!
The first picture is from Saturday night before going out to dinner, the second picture is our very comfortable bed, and the third picture was taken on Friday evening while I waited for Mrs. TBF to finish her business call so that we could go downstairs and have a cocktail before going out for dinner.
The staff at our hotel told us that they were "angry" at how the media had portrayed the rioting. They had "a few" cancellations, but they said that other hotels had a lot of cancellations. We rode the Metro, we walked around, and we went about our normal tourist stuff. We never felt unsafe, and we never felt as if danger was imminent. The only time we came across anything out of the ordinary was when we couldn't make it to the restaurant we wanted to go to on Saturday night because the taxi driver couldn't make it around a peaceful student protest that was taking place. People were walking down the street to a gathering point, and the police had the street blocked off. I asked the driver if there was any danger - he just chuckled and said that it wasn't "the revolution". He said it in French, so that's what I think he said.
There are unsafe places in EVERY city in the world - the center of Paris is not one of them. I feel bad for the people who decided not to go to Paris because of what CNN said - their loss, our gain.
Posted by The Big Finn at 11/14/2005 06:15:00 AM

Great pictures (and posts) thanks for sharing.

I like the timer on my camera, but mine also has a remote control to trigger the shutter - I love that!