Losing Weight Is An Amazing Thing...

I don't know why I find it so amazing, but now that I've lost weight, I'm able to buy clothes that I never bought before when I was twenty pounds heavier. That, actually, was the driving force in me deciding to go on a diet. Before losing weight, I had to buy XXL shirts. Now, I can buy XL shirts. Going down one size makes a big difference in what I'm now able to buy vs. before. For example, I can now buy Lacoste shirts. I don't even have to buy the largest size! So that's what I did.
We went into the Lacoste store on the Champs Élysées and I bought a couple of shirts. One of them ended up not fitting right, so Mrs. TBF returned it the next day and exchanged it for two other shirts. I also bought a scarf at Orly Airport on the way home. Believe me, that's a shopping spree for me on a weekend trip.
I could tell that Mrs. TBF was feeling a little disappointed that she hadn't bought anything as far as clothing or accessories go. How did I know that? Oh, I don't know...maybe it was her saying, "...I didn't buy any clothes, or ANYTHING this weekend!" What...did you think I was a mind reader or something?
So, with the final minutes before our return flight to Basel/Mulhouse Airport ticking away, Mrs. TBF spotted a winter coat at the Printemps store at Orly Airport while I was buying my scarf. She had told me a couple of weeks ago that she needed a new winter coat. Back when I was younger and less wise, I would have said something like "didn't you just buy one last year???". Now, I know better.
We toyed with the idea of doing the whole getting-the-V.A.T.-refund thing, but we determined that it would be too complicated a task on a Sunday evening at Basel Airport. We had just enjoyed a nice weekend in Paris, so what the heck...? Let France keep the tax. We got rid of the packaging and tags (so we wouldn't also end up paying Swiss sales tax) and boarded the flight.
An interesting thing happened on the flight. While we were taxiing on the tarmac, a lady a couple rows in front of us vomited and then passed out. One minute later, and the flight would have taken off. But, the pilot ended up taking the plane back to the gate. A bunch of paramedics came on board, and ended up taking the lady off the plane. It was a first for not only me, but also for Mrs. TBF - the veteran business traveler. 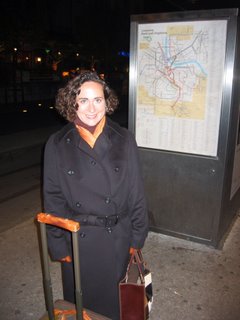 Anyhow...here's a picture of Mrs. TBF wearing her new coat while waiting for the tram in front of the Basel Train Station after getting off the airport bus. She has her (smuggled) winter coat, I have three shirts with little alligators on them, and we're home from yet another great trip to Paris.
Posted by The Big Finn at 11/14/2005 11:00:00 AM

I get lost in Basel airport. One day you will have to explain to me how to get on the bus without going through French and Swiss security and customs. It is so confusing, but I have the feeling I am just being stupid.