...in the modest task that was your charge!
On Saturday morning, I gave Mrs. TBF the camera and told her that her assignment for the day was to take some pictures of me. I love having a bunch of pictures of Mrs. TBF, but I also wouldn't mind her taking an occasional picture of me. For the most part, the pictures you see of me on The Big Finn's Big Blog are either self-portraits that I take by setting the camera on top of a shelf/mailbox/beer glass/etc. and setting the ten-second timer. Mrs. TBF took on this assignment with neither vim nor vigor, but I figured it would be a good test-run. Afterall, the plan is that I'm going to buy a new camera in the next couple of weeks and then she'll inherit the old Canon as her camera.
Mrs. TBF wanted to check out some little specialty shops in the Madeleine section of Paris. I wanted to go see the catacombs and Jim Morrison's grave....
So...while we were walking around Madeleine, I gave Mrs. TBF a subtle reminder of her photo assignment....oh, something to the effect of "...how are those photos coming along?" that seemed to not go over too well. After checking out various gourmet shops that specialized in truffles, condiments, and olive oil, I began to have very low blood sugar and began to winge (..as the Brits say) about being hungry and "...not getting to see anything I want to see!" Realizing that TBF with low blood sugar is a very bad thing, Mrs. TBF agreed to stop at a little Brasserie where we ordered a couple of beers and some food.
You know what? I'm forty-three years old now, and I should know better. However, I'll say right now that if I live to be one-hundred years old I'll still never learn to NOT press my luck. I did a very stupid thing. I grabbed the camera out of her handbag and I said something like "...how about letting me see all of those candid photos you've been taking of me so far today?" 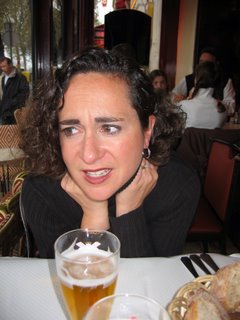 I managed to snap this photo of her right when I asked the question. Wisely, I decided not to take another photo. 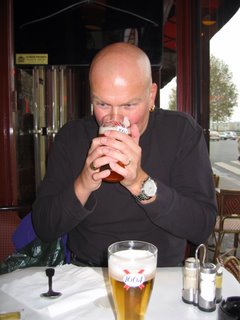 The camera was taken from my hand, I received a short lecture, and then Mrs. TBF took this photo of me. I must say, that it is a beautiful, candid shot. Notice how she captures my moment of fear and shame. She shows tremendous promise as a photographer! 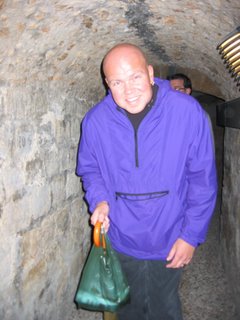