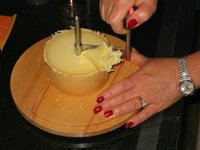 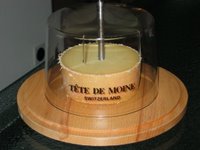 As in...a swirl of tête de moine.
Tête de moine (translation = head of the monk) is a cheese that's made only in Switzerland at nine cheese dairies.
Tête is sold year-round in Switzerland, but we kind of think of it as a winter thing. And since the weather has taken a turn toward winter this past week, I thought it only fitting that we begin eating this very Swiss cheese.
We bought it last year for the first time. In order to serve it up properly, you need something called a girolle. The cheese is plunked down onto a spike, and then you swirl a blade over the top of the cheese (as Mrs. TBF is doing in the picture) producing something that looks like a girolle mushroom. After you're done swirling the tête...well...you eat it! The girolle even comes with its own special cover.
I'm pretty sure you can find it at a good fromagerie in the U.S. It was on the menu at Charlie Trotter's when we were in Chicago a few weeks ago. However, I think it's farly rare outside of Europe.
We like it. I think it tastes "chocolatey". Mrs. TBF doesn't agree. She thinks it just tastes like...cheese.
Tonight was the first night this fall that either one asked the other one if they'd like "a swirl of the tête." It won't be the last. We'll have a swirl here and there until spring comes. Then, we'll put away the girolle for another season.
NOTE: Neither Mr. nor Mrs. TBF have received any endorsement money from the Tête de Moine Trade Association for this blog posting.
Posted by The Big Finn at 11/17/2005 04:55:00 PM

Great write up - I love it! Something that doesn't get talked about often.

Hmm - I'm rather curious if I can find that here in Vancouver becuase it looks like a Bordum which is everywhere - isn't it Danish. I've had it once, but I completely forget the taste of this cheese.

The girolle IS a Bodum. You can also use it for chocolate. I'm sure you can find one all over North America.