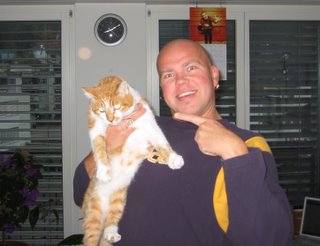 I just spent thirty minutes typing out a tribute to our cat King. I went to save it as a draft, and...poof...it was lost. I couldn't retrieve it, and I'm not typing the whole thing again. So...
I'll just say that FIFTEEN YEARS AGO TODAY, we adopted King from the Save-A-Pet animal shelter. The shelter had named him "Scarface" because he came into the shelter looking like he'd been in a fight. We adopted him (along with Binky, and then Zane the next year) because we came home from a vacation and found mouse droppings in our utensil drawer.
When I look back, it's amazing how we knew NOTHING about pets at the time. We decided to adopt King and Binky, and then we said to the shelter people, "...ummm, what do we do now?" We drove to Petcare Plus, bought litter boxes, food and water bowls, cat food, etc. Then, we brought King and Binky home in cardboard boxes that the shelter provided. King's box had to be taped shut, and he tried to bust out of it the whole way home. We let them loose in the house, and the rest is history.
King's the sole survivor. Binky (the puker) lost her battle to various ailments and ended up in kitty heaven in 95?, 96?...can't really remember. Zane (the pisser) ended up with kidney failure, and we had to put him down shortly before moving to Switzerland in 2000. Dominique went to doggy heaven earlier this year at the ripe old age of 13 years and 10 months. But, King continues to hang in there at the estimated age of 17.5 years old. Since he was found as a stray, the shelter estimated that he was 2.5 years old when we adopted him (according to his adoption papers which I just found a couple of days ago).
King's been a great cat (except for the fact that our furniture has become his personal scratching post kingdom). He's been relatively healthy (just had to start taking thyroid medicine earlier this year), he always uses the litter box (unlike Zane), and he only pukes occasionally (unlike Binky). All in all, just a great addition to our household for all of these years.
The original price to adopt King? $30! It seemed like a bargain at the time, but the costs associated with owning pets is amazing. I just figured out that King's 1.25 cans of Iams per day that he currently eats costs us 866.88 CHF per year. Multiply that by 15 years, and you get a total of 13,003.13 CHF. That's about $10,000 U.S. to all you people in America. This doesn't count vet bills, kitty toys, little kitty snacks, kitty litter, etc., etc. Wow!
But hey...who's counting? LONG LIVE THE KING!
Posted by The Big Finn at 11/10/2005 03:45:00 AM

That is a really cool thing you guys did. I'd say if you don't have kids, pets are them. Our little Roxy just died last month after 17 years. I think she died from a tumor/cancer. She was spunky till the last day.

Someone sent me one of those annoying emails today about all the things you never realized and it said that the cost of raising a medium-sized dog to the age of eleven was $6,400.

Awww, Long Live The King, please accept my virtual kitty love. He definitely looks spry for his age. I like cats more than people.
Your cat is the same age as my German teacher. Very strange.