That's what time my deep R.E.M. sleep ended this morning. Let me backtrack a bit...
Mrs. TBF had to go to Nyon on business for one night, and asked me if I'd like to come along. We took the direct train from Basel to Nyon yesterday evening, and checked into the Hotel Real Nyon at around 8 p.m. I noticed on their website that the Hotel Real claims to be a 4-star hotel. I'd say that's a bit of a stretch. It's not bad, but I would say it's more like a 3-star hotel. It's kind of minimalist (which I say means no place to sit except your bed), but it is very clean AND it is right across the street from Lac Léman. Very clean, that is, except for the fact that the shower has a shower curtain instead of a shower door. I don't know about you, but Mrs. TBF and I both find this to be kind of gross. You know, you turn on the water, the shower curtain moves inward, and then you spend the rest of your shower fighting to keep the curtain from sticking to your body. If that isn't bad enough, just keep in mind that the previous 500 or so guests (some possibly of questionable hygiene) have done the exact same thing. You don't really think that hotel is cleaning, or changing, that shower curtain regularly, do you?
After checking in, we made the five-minute walk up the hill to a restaurant called Auberge du Chateau where we had a very nice dinner with our friend (and Mrs. TBF's colleague) Jeanette. A little soup, a little fish with veggies, a little cheese, a bottle of wine, some coffee, some nice conversation, the triple-Swiss-kiss goodbye, and voila...Mrs. TBF and I were back at the hotel and asleep by midnight. 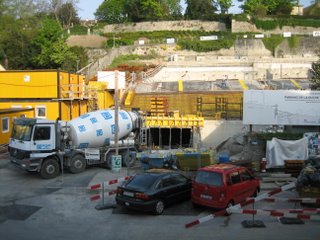 7:04 a.m.!!!!
I woke up to what sounded like a man whistling. You know...the way you'd whistle to your dog. Then, I heard the sound of metal screeching against metal. This was followed by the sound of a truck backing up, and then followed shortly by what sounded like...a...cement mixer. Mrs. TBF mumbled something about it being Migros - the grocery store next to our house that has bread deliveries before 7 a.m. - but we weren't at home. I got up, looked out the window, and THIS is what I saw. As it turned out, the metal screeching was a huge crane, and it WAS a cement mixer. Amazingly, neither Mrs. TBF or I had noticed the night before that a multi deck parking lot is being built directly across the street from the hotel. Imagine that!
So, here's a tip for you if you ever decide to travel to Nyon and stay in this hotel: DEMAND A ROOM WITH A VIEW OF THE LAKE. You'll probably still hear some of the construction noise, but at least it won't be 25 meters from your bed.
Posted by The Big Finn at 5/03/2006 05:00:00 PM

Hehe, this brings vivid memories. My Canadian girl friend, today Mrs.Finlander, took me to Jasper for a little R'n R. It was quite late and we just wanted to find something cheap (no stars required with this poor bastard) and quiet. We ended up with the little charming motel in the out skirts. The bed was perfect and in no time flat we both were happily shawing logs until we suddenly jumped up to an apparent earth quake. Well, thank goodness, it was just the first of the six freight trains that passed by our bed during that never to be forgotten night in the beautiful Canadian Rockies.

I will no longer accept meters, kilometers, liters or any portion of the metric system. I don't care that it makes sense, that it is in sections of ten. We angry egotistical Americans demand yards, pounds etc... I do however enjoy hearing the term 'stone.' For some reason the whole UK thing fascinates me.

I've decided that my new pet peeve about hotels is when they don't have anyplace to sit other than the bed. Or sometimes they do have a chair, but it's a really uncomfortable straight-back desk chair that I have no desire to sit in. Is it too much to ask to have someplace other than the bed to sit and read or watch TV? (Keep in mind this request comes from a woman in her 8th month of pregnancy who can no longer lay down comfortably for any extended period of time... so maybe I'm being a bit unreasonable...)

lake view is mandatory in nyon.
It is GOOD ferry weather tho!

hey I recognize that spot! The chateau of Nyon must be to the right of the photo. Well at least I know I walked down from that area onto the waterfront last summer on our vacation and ride from Nyon to Yvoire.

TMS - The metric system will remain as the official system of this blog. I'll post English measurements for your sake if I think of it.

Gretchen - I agree. This was a business trip for Mrs. TBF, so the room was a bit basic. It was ok for one night.

DP - I agree regarding the good ferry weather. Pictures will be forthcoming...if I can only upload them to Blogger...been having problems.

ET - Yeah...to the right of the photo AND a few hundred meters (sorry TMS...yards) up the hill. The hotel is right across the street from the lake.