Corsica - TBF FREAKS OUT At Breakfast!

One of the things I look forward to the most when Mrs. TBF and I go away on vacation is the hotel breakfast. When we're at home, I'm a good boy, and I always eat a very light breakfast. When we go away - it's time for me to gorge!
Now, it doesn't have to be a huge buffet breakfast - although that's my preference. Let me tell you, there's nothing better as far as I'm concerned as coming back to our breakfast table with the contents of every chafing dish on the buffet table stacked on my plate resembling either the Eiffel Tower or the Great Pyramids (depending what kind of mood I'm in). So when I saw that our hotel in Corsica had no buffet breakfast, I just gave it a c'est la vie and decided I'd go a la carte (Damn those French lessons paid off!).
I saw that they offered a "continental breakfast", but I decided to take a pass. At 25 Euros, it seemed kind of expensive for coffee, orange juice, a bread basket, and maybe a couple of other things like preserves, etc. I began to peruse the a la carte offerings, and that's when I saw it: freshly squeezed orange juice: 7.50 Euros.
I couldn't believe what I was seeing. It had to be some kind of mistake. I looked at the rest of the menu - an omelette was 8 Euros, scrambled eggs and bacon were 9 Euros, a pot of coffee was 5 Euros. I looked around at the other tables. I thought that maybe people would have a liter pitcher of OJ on the table, but NO! It was just a regular little juice glass FOR 7.50 EUROS!!!!! It took every muscle fiber in my body to avoid being like Captain Kirk in the scene from the Star Trek movie where his whole body begins to tremble, and then he just yells out "KAAAAAAAAAAAAAAAAHHHHHHHHHHHHHNNNNN!"
I started saying things like "It's SHITE like this really FARKS with my mind!", and other muttered verbal lashings that are still echoing somewhere in the valleys of Corsica. I seem to recall using the word "extortion" at some point. I might have wished eternal hell on the Corsicans at some point. Perhaps a curse was attempted - I'm not really sure. I suddenly became aware of the fact that it was at this point that Mrs. TBF began speaking to me in an unemotional monotone as if she were a hostage negotiator speaking to a terrorist. "Just...order...an...omelette...some...toast...and...some...coffee", she said. "You...need...some...coffee." 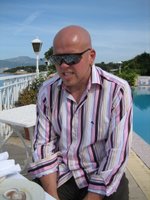 I have to admit that she handled the situation very well. That was, until I had finished my breakfast. My blood pressure was just coming back down to normal when she told me to look at the table next to us. The people had just finished their breakfast also, and they were getting up from the table. That's when I noticed it: the lady had left about a half-inch of her OJ in the glass. I began to freak out again, and that's when Mrs. TBF took this picture.
"Just...get...up...from...the...table...very...slowly..."
Posted by The Big Finn at 5/31/2006 07:45:00 AM

Not knowing what a Euro equals in American dollars, I am not going to comment on the price of the meal. I am going to say, however, that you are the most stylish straight man I have ever seen. Nice shirt. Also, I think I see in the reflection of your sunglasses, some leftovers on your plate. I hope you finished them.

you just showed your canadian side with the shite and the farks... at least for this southerner

I bet if you would have ordered it, ladies dressed in shimmering veils would have come to the table and squeezed it before you very eyes....who knows they have may have forgone the glass entirely and squeezed it directly into your mouth. Oh well, I guess you'll never find out then.

DP - I only use "shite" and "fark" because I was reprimanded by Mrs. TBF for using the real words once on the blog (...as if SHE never uses those words....sheesh!). She somehow thinks of this blog as a "family blog". It's all about compromise - she says I shouldn't do it, and I don't.

Michael - Perhaps you're right. Although I saw none of those ladies you described in the near vicinity. Now that about it...there was not one waitress at the hotel restaurant. Strange.

TSK - BTW...thanks for the compliment on the shirt. One really nice thing about losing all the weight I lost was that I had to go buy all new clothes.

OMG, 7,50 EUR for an orange juice??? I bought a 4-pack of Hohes-C at the Coop last week for CHF 7,00. That's 4 liters of OJ! Man, I think I have make a change of career and move to Corsica. I could get rich by just selling Coop's orange juice over there. And that while relaxing on the beach and serving the people OJ for 7,50 EUR. Good deal, huh?

I too would have nearly had a coronary at €7.50 for a glass of OJ. But then I walk around shops and baulk at the price of just about everything. "eight bucks for a hand towel? Get farked!"

I guess they really take advantage of spring and summer time visitors! The entire time I was thinking of when ms. mac had her trip to Italy and paid an arm and a leg for coffee and chocolate or whatever... Basically the same (a bit)..