We ended up not doing as much as we had planned during last week's trip to Corsica. Our original plan was to rent a car for a couple of days and drive around the island to take in some of the sights. However, the concierge at our hotel had "trouble locating" (I say...didn't try very hard) a rental car with an automatic transmission. I never learned to drive a stick, and Mrs. TBF hadn't driven one for about twenty years. Deciding that switchback roads with a 1,000 meter drop wasn't the place to learn/practice - even though the concierge said, "...don't you just want to try it?" - we opted to pass on the rental car. For the most part, we just relaxed around our very nice hotel - Le Maquis. 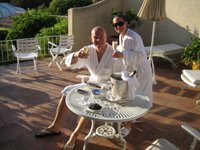 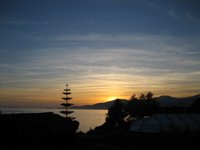 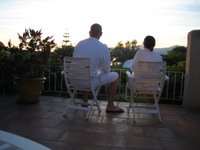 Probably my favorite part of the vacation was that our room had an enormous patio. Although we didn't have the biggest room at the hotel by any means, I'd say that we probably had the largest, or at least second largest, patio. It was really a nice bonus, and we spent a lot of time on the patio being lazy, looking at the scenery, soaking up the sunshine (only one bad weather day out of six!), watching the sunsets, and pretty much doing a bunch of nothing.
Posted by The Big Finn at 5/28/2006 05:30:00 AM

Wow. That view is really great! Mmmm. And those marinated olives...

That sunset looks incredible and that deck is huge. I'd be out there every day loving that too!

Is that an anklet?

Michael - Why...yes it is. However, let me explain. My friends' kids (Sam and Alie) gave it to me as a friendship bracelet anklet about a year ago. So, I've worn it ever since.
Um...is it...kind of gay?