Yes, we actually did venture off the grounds of our hotel while we were in Corsica. After having breakfast the first morning, and passing on the 7.50 Euro freshly squeezed orange juice (more about that later...I'm still fuming...!), we went to the front desk to see what there was to do as far as activities were concerned. We already knew that we weren't going to be taking taxis all over creation, so we were pleased to find out that there was a boat that left for Ajaccio several times a day from a dock about a 30-minute walk from our hotel in Porticcio. And, the best part??? The round-trip boat ride only cost 8 Euros per person (as opposed to 90 Euros for the taxi).
I just want to point out that six years ago, when we were living in the U.S., the thought of a one hour round-trip walk for a boat ride would have resulted in me heading directly to a chaise lounge next to the pool with a cigar in one hand and a stack of magazines in the other. But alas, we are now Europeanized, and we actually relished the idea of getting out for a little exercise. 30-minute walk? No problem.
So, we made the walk along the side of the road. We occasionally came across a sidewalk, but most of the journey was along dusty paths. After arriving at the boat dock, we actually decided to buy tickets for a three-hour journey to the Sanguinaire Islands. We weren't expecting much more than a leisurely boat ride, but it actually ended up being the highlight of our trip. 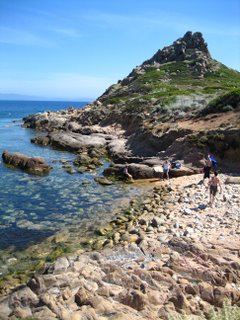 We didn't realize it when we booked the trip, but we actually were allowed to get off the boat and roam around the island for an hour. The main island, a nature preserve, was quite beautiful (in a deserted island sort of way). It's covered with with le maquis which is what the Corsicans call the wild herbs that grow all over the island. The sun was shining, the seagulls were screeching, the breeze was blowing, and there we were looking out at the blue sea. It was really nice! 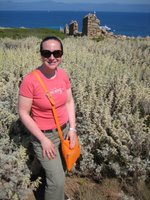 We hiked up the rather rocky hillside, admiring the flora from time to time. Mrs. TBF insisted that this was wild chamomile. I wasn't so sure. Anyway, we saw a bunch of wild fennel, rosemary, and a bunch of other plants we weren't able to identify. After awhile, our attention pretty much turned to the fact that a lot of the people walking around the island had very inappropriate footwear for hiking up "crumbling" hillsides. Plus, they looked as if they hadn't had too much exercise in....oh, let's just say...a long, LONG time. I was kind of expecting to see someone come sliding down the hillside sporting a nasty "le maquis" rash, but no such luck! 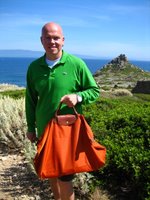 Oh...and by the way...does this look gay? We like to use this big Longchamp bag as a travel/beach bag when we go on our trips. There I was, minding my own business, when suddenly Mrs. TBF said something like: "Um...hon [short for honey...aww...aren't we cute?]...how about if you give me the bag. You look...kind of...gay."
Imagine that! The nerve!
On the way back to Ajaccio, we actually saw real-live, wild dolphins surfacing by the boat. Dolphins in Corsica - who knew?
After arriving back at Porticcio, we ambled down the dock on our "sea legs" and then set off on the 30-minute walk back to the hotel. Suddenly, Mrs. TBF didn't think that me carrying the orange bag was so "gay"!
Posted by The Big Finn at 5/30/2006 05:30:00 PM

Can you hurry up with the €7.50 orange juice info please?

TBF--I can send you the Erasure song ("Oh L'amour") that we just downloaded...it would go really well with your bag.

Kirk - I swear that "The One You Need" by Erasure was playing on the iPod the moment I read your comment. Actually, I think I downloaded it from a CD that I borrowed from you and Gretchen.
Am I reading some kind of connection here?

Gay?? Well, maybe it just the way you're holding the bag in this picture :-)

Gay? Not holding the bag like that. It needs to be hanging on your arm.

Now if you had been holding it up and in front of you, I would have said you were gay!

CS - I was only holding the bag that way for photographic purposes.

Michael - Thanks for the info. The things you learn by having a blog. I'll definitely store that one in "the vault".

See Mrs. TBF? I told you I didn't look gay

Ok...I take it back...but now that I look at the picture again, I think the bag is also a little large and I need to get a smaller one for the beach. Then would he look gay?

LOL - I just say the bag is too big. But I like the color because it stands out and I'd think Orange X would love the color too. ;-)