Geneva Just May Be... 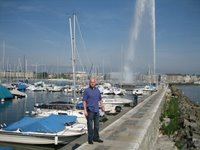 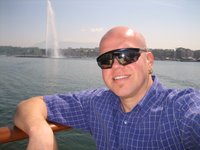 my new favorite Swiss city. I like Luzern, Lausanne is good too, Basel, Bern, and Zürich are fine, but I decided yesterday that Geneva might be the Swiss city where I would most like to live.
Yesterday, while Mrs. TBF was working her butt off in Nyon, I took the train to Geneva with no particular plan of action. The weather was great, I had on some comfortable walking shoes, and off I went...
I think one of the reasons why Geneva appeals to me is that it's built along a lakeshore so it reminds me of Chicago. First I walked along the shoreline right up to jet d'eau. While I was standing there, I decided that it might be nice to see what it looked like from the lake. So I paid my 9 CHF (an unbelievable bargain), hopped on a boat that took me on a "Beautiful Shores of Geneva" one-hour cruise, and spent the next hour basking in the sun. It's a good thing I had decided to slather SPF 15 on my head and face that morning.
At 12:15, I was back on shore and decided to get something to eat. Unfortunately, most of the outdoor tables at the various restaurants were packed, so I decided to head up the hill to check out the archaeological site under the Saint-Pierre Cathedral. Mrs. TBF and I have tried to see it two times. The first time, it was closed. The second time, the lady sitting at the desk wouldn't let us in because it closed at 5 p.m. even though it was only 4:30 p.m. We told her we'd go through it quickly, but she would not budge. So, I'm happy to report that this time I was successful in seeing the site. It was pretty cool, but not the greatest thing I've ever seen. 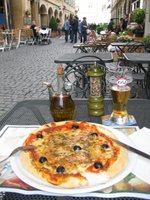 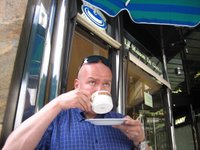 At around 2:00 p.m., my stomach was talking to me. The lunch crowd had all gone back to work, so I sat down at a shady spot outside of a place called 50-50 and enjoyed a pizza and 1664. Let me tell ya...it really hit the spot.
Having refueled, I meandered back through the old town (which I think is one of the nicest ones I've seen in Switzerland) to Museé Rath for the Le Corbusier ou la Synthèse des arts exhibit which I really enjoyed (and managed to stay focused on for more than an hour...believe it or not...), and then it was time for a quick jolt of caffeine before heading back to the train station, and back to Nyon. 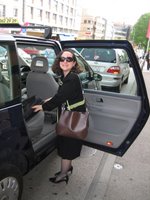 Mrs TBF, you really seem to love your job - what do you do? (or is that topic verboten?) Thanks for the fun photos and blog :)

That pizza looks amazing. Is it my fave, a Napoli with achovies, capers and olives?

Beej - Mrs. TBF will reply to you later (I'm still not sure what it is she actually does at work...).

Ms. Mac - Yes it was. Damn tasty, but it does cause one to build up a thirst due to all the salt.

Beej - Whilst the topic itself is not verboten, I have decided I will never blog about work events...mainly to protect the innocent.
I head up the compensation and benefits function for a division of one of the Swiss biggies. I spend a lot of my time on executive compensation. And, yes, I do really enjoy my job and particularly all the great people I work with. And, I get to travel to our various locations to work with these people...so life is pretty good...especially when TBF is able to join me on the road - which is pretty rare actually (see Oct 2005 for trip to Bangkok).

Aaah, thank you MrsTBF, I didn't want details, just a general idea like what you wrote. Did you get a business degree for that kind of job? I am just kind of curious what possibilities there are for work over there as MrB and I hope to end up there next year. I have a library degree, so I don't think that will help me much at all. I will probably end up not working, which I really wouldn't mind, but still can't seem to stop myself from looking for something. I have really enjoyed reading about all the various trips you and TBF have taken and think it will be very good to use your blog as a travel advisory because it has so much good information in it. You guys have had a very interesting and fun life over there! It really helps to think about what fun you've had when I start thinking "what the heck are we doing!?"

Saying that Geneva might be your favorite city hurts my ears... I can't believe that. Although it is a nice place to visit, I'd never want to live there. Just too many other places on that lake that take presence. Yeah maybe I am biased... But I'd agree that if you have a day to kill that it's an incredible place to visit for the DAY... hehe..

ET - I like most of the towns around the lake, but I'm a big city kind of guy. I wouldn't want to live in any city smaller than Basel - and Geneva is about the same size. I liked when Mrs. TBF had her appartment in Nyon, but the town was kind of dead at night.
Also, I think one could live in Geneva without needing a car, and that's one of our goals for the next place we end up living. We're hoping our next car will be a "Mercedes TaXi"!

I hope one can live in Basel without a car! ;)

TBF - ok - your explanation sounds like a decent one. I guess I like the smaller town coming from somewhere that I needed a car always and hated that. I'd love not ot have a car also. Seriously love where we live now because it's virtually not needed but not affordable to buy a place... I'd rather just train 50 mins and go hang out there. But yes a mercedes taxi would be nice. I guess you'll have to stick to staying in Switzerland! :)
Can't wait to hear about your gathering.

I hope you and Mrs. TBF get to move back to Chicago real soon.

Is your stay in Switzerland actually scheduled to be over? I thought you were there because you wanted to be...

Beej..
No, our stay in Switzerland is not "scheduled" to be over. However, we also don't think that we'll stay here forever. Maybe...but probably not. We've been telling people "a couple more years" for about four years now. It really depends on a number of factors, the most important being Mrs. TBF's job satisfaction, our overall happiness living here, getting "the itch" to live somewhere else, etc.