...to wish The Medium Swede and The Sour Kraut a very happy 40-something birthday.
TMS and TSK are an extremely rare breed. They are husband and wife who...were born on the same day AND in the same year. Wow!
I think...I mean...I KNOW they were a bit miffed because I didn't blog about us getting together while I was in Chicago. But, I had it in mind that I'd hold off until their birthdays. Honest! 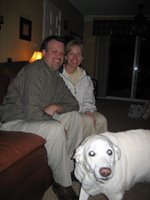 I've know TMS for going on THIRTY years (WOW!), and I've known TSK for the better part of fifteen. They have two boys, and a dog named Zoë. Zoë is (I think) eleven years old now. When I was at their house a few weeks ago, they kept asking me: "Doesn't she look good for her age?" To which I replied something like: "Yeah...but in a couple of years...she'll RIP OUT YOUR HEART!!!" I know...nice guest! 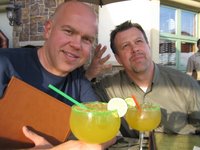 TMS, TSK, the boys, and I ended up going to a Mexican restaurant near their home for some muy bueno Mexican food (duh!) and some margaritas that were touted as being made with Grand Marnier. Let me tell you - I'm gonna go out on a limb here by saying that my margaritas go a little heavier on the Grand Marnier than these puppies...but, they were pretty good nonetheless. Plus...THEY WERE HUGE (I think I saw a goldfish swimming in mine)!!! I'm not joking...you'd need to finance the margaritas if they were this big in Switzerland!!!
Now, The Medium Swede and The Sour Kraut told me that they don't really care to have their blogs linked for the rest of the blogging world to see. But hey...when the heck did I ever listen to what anybody else said? Plus, I think they'd make a mighty fine addition to our little blogging community.

Hi TBF! I was wondering how easy it would be to travel via airplane or train between Basel and Vienna - is that one of the routes on that new cheap airline you were so happy about? ((Jet Blue or something like that, that I now can't locate your blog entry about) I applied for a pretty interesting library job in Vienna yesterday that would start probably next spring, so the timing is great for moving to Europe...but just wondering about how easy it would be to visit each other (hubby in Basel, me in Vienna). Thanks!

Beejum (sorry TBF) - There are daily flights from Basel to Vienna with Swiss (www.swiss.com) and I'm sure that if you buy cross tickets, you might get a pretty good deal after all.

TBF - I've alreday added TMS to my favourites and will add him to my sidebar this weekend. Still have to visit TSK, but I will. Yeah, Margerita's are huge in the US, but much milder than yours.

Beej-Sorry, I misread your question. Yes, there are daily flights between Basel and Vienna on Swiss (actually a codeshare with Austrian Air). However, they are not cheap (I'm not sure what CS means by "cross tickets"...round-trip?). There's no competition, so you won't pay EasyJet rates. I seem to recall that we paid something like $250 U.S. per ticket last December.

I'm so glad you've included the links to TMS and TSK because I LOVE the pictures of Zoe! I know... I'm such a sucker for labs...

I'm glad you included the links too. It's interesting to know how you knew TMS. And I thought that was unique with birthdays. Ironically I had a roomate with my same birthday as well as a boyfriend who was the day before and another the day after.

What's truly weird is that not only do TMS and I share the same birthday, out first child was due on that date and, at one point, both of our bosses shared our same birthday.

Zoe loves the use of the umlaut over her name by the way.