We ate very, VERY well in Corsica. We ventured into Ajaccio the first night for dinner next to the marina at a place called Le Floride. Although the dinner was very good, my complaint was that it was about a twenty minute taxi ride to go from our hotel to Ajaccio. Actually, it wasn't the twenty minutes that bothered me. What bothered me was the fact that the taxi ride cost 45 EUROS EACH WAY! The taxis were more expensive than they are in Switzerland - and they're pretty freakin' expensive here. The food at the restaurant was good, but in my opinion not worth spending an extra 90 Euros on transportation. So, as is often the case, our frugal inner voices began speaking to us and we decided to eat dinner at the hotel from the second night on. This turned out to be a very good move, because the dinners at the hotel were OUTSTANDING! 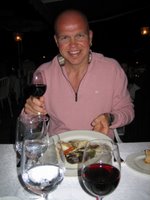 The restaurant (L'Arbousier), had a four-course prix fixe dinner every night (actually five-course if you count the amuse-bouche) which didn't cost much more than the round-trip Ajaccio taxi fare. Plus, the food was really, REALLY, good. We ate a lot of fish, "baby pig", Corsican cheese, all washed down with some really good Corsican wine. Having never really had Corsican wine before, I just asked the two head waiters (one looked like Freddie Mercury, the other one looked like Vladimir Putin) to pick the wine for us each night. They did just that, and I have to say that they picked out some really nice wines. Corsican wine - a big thumbs up from The Big Finn! Dinner at L'Arbousier - four thumbs up (from me and Mrs. TBF)!!! 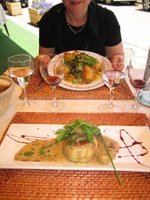 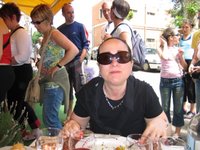 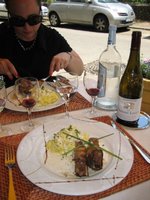 After that first night out in Ajaccio, we only ventured out of the hotel for a meal one other time. On our second to last day in Corsica, we rode the boat (more about that later) to Ajaccio and had a nice lunch at a place called L'Altru Versu. Agnes - the lady who couldn't locate a rental car without a stick shift for us - recommended it. And, I have to admit, that she didn't steer us wrong. Although I was a bit concerned when we arrived at the nearly empty restaurant, our starters came out and looked pretty darned tasty (they were!). Our table was outside right next to the front door, and we got on with the business of enjoying our lunch. Suddenly, this huge tour group showed up (it must have been a least thirty people), plus a few other couples, and the restaurant that had been nearly empty minutes earlier was suddenly packed! Fortunately for us, we had put in our order just before the group showed up, so it wasn't too long before we had our lamb chops wrapped in bacon main course. It was so good that I'm not ashamed to admit that I picked up my chops and gnawed them down to the bone. Then, I took Mrs. TBF's chops after she was finished, and...I gnawed on the bones until they were almost void of any meat whatsoever! DAMN....THEY WERE GOOD!!!!
Hey...now that I think about it...that was almost the perfect TBF day: sunshine, bacon, cigar, & marital relations. The only thing missing was a sauna - I don't think our hotel had one.
I guess you can never have it all!
Posted by The Big Finn at 5/28/2006 07:40:00 AM

did Mrs TBF give you the prix fixe?

I told ya the food was great over there! Maybe not EVERYWHERE, but most of the places I've been to were very good. And who needs a sauna after all you had that day anyway, eh?! ;-)