Amalfi: Starting The Day Off Right!

Morning is a busy time for us here in Amalfi. The alarm goes off around 7:30, and then it's up 'n' at 'em! On alternating mornings Mrs. TBF goes down to the gym that's right by the pool and gives the treadmill a working over (I prefer to workout in the late afternoon). While she's down there, she slips over to the pool and puts a couple of books on our prime location chaises that the ("greased" by TBF) poolstaff has conveniently reserved for us with towels. The books are just for added emphasis - I'm sure the mild-mannered guys by the pool would instantly turn into junkyard dogs if anybody tried to steal our spots. After her workout, Mrs. TBF showers, and then its time to head down to breakfast.

Breakfast is quite the event here at Santa Caterina. The staff lays out a nice spread consisting of your usual juice, coffee, eggs, bacon, toast, cereal, yougurt, fruit, etc. But, there's also the stuff one normally doesn't get at home like marinated eggplant, an assortment of dried/cured Italian meats, various olives and cheeses, etc. It's a real challenge to not eat to the point of bursting - believe me!

Along with the food, another great feature of the breakfast buffet is that the staff will NOT LET YOU CARRY ANYTHING YOURSELF. Seriously. If you pour yourself an orange juice, a man in a dinner jacket is right behind you holding a silver tray. He asks to take your juice, puts in on the tray, and then follows you back to the table like a lost puppy where he sets it down on the table for you so you don't have to. After spending days trying to capture this exchange on film, I finally managed to stop eating my omelette long enough to pick up the camera yesterday as one of the staff "relieved" Mrs. TBF of the heavy burden of her fresh fruit. And, speaking of omelettes...

What the hell is with the egg white omelette crap? I've really begun to feel sorry for the omelette station guy. It seems that every American - yes, it seems to be an American-only phenomenon - feels it necessary to order an egg white omelette to go along with the pile of bacon and cheese that's on his or her plate. I mean, what the heck is this world coming to? Either eat the omelette the way it was meant to be eaten, or don't order it at all. Oh, and another thing, don't complain about how long it's taking for "Mario" to make your omelette. YOU are the cause of the back-up. 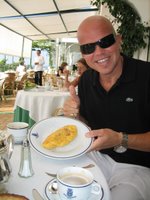 This being said, I felt the need to help out Signor Omelette Guy when I saw his bowl of egg yolks sitting beside the burner. So, you know what I did? I ordered an omelette with extra egg yolks. That's right! I told him to throw a couple of extra egg yolks in my omelette. And, you know what? It was really good - nice yellow color, extra creamy...magnifico!

OK, I admit it... you're starting to make me insane with jealousy. Happy now?

Putting your body on the line like that for the omelette guy.!So selfless and so admirable! I have to agree with Jul and declare my utter "jealousy". I'm only in the new job a week and looking forward to the holidays already!

Why isn't the gentleman in the dinner jacket helping tip your plate towards the camera for this photo?

ok - so jealous as well...
I think you are being treated like a king and queen! What a vacation!

Yeah! Go for it TBF! Show 'em how to make the real juicy and creamy yellow omelettes. Show 'em the only right way...

I hope those guys don't follow you into the bathroom..

An omelette without egg yolks?? Why on earth would anyone want THAT?!!

Jul, Barry, & ET - no need for jealousy...just think of it as research for your future vacations.

TSK - It was an unposed, live-action picture.

OX & CS - Extra yolks are definitely the wave of the future!

Ummm...could we please trade lives, like, right now? No one has ever carried my breakfast for me.

I see TMS has come close to breaking the cardinal rule.

Mrs. TBF - I love the breezy vacationwear you have on. Each time I pack to go "on holiday" I pack my suitcase with that type of fasual clothing(fancy-casual...I just coined the term). But while on vacation, I seem to do the t-shirt, shorts, baseball hat grungy looking thing. I admire your fasualty.

TSK - If it makes any difference...the shirt is one size too big.

I hate omelettes and I have to say that I'd eat that extra creamy, extra yellow omelette!