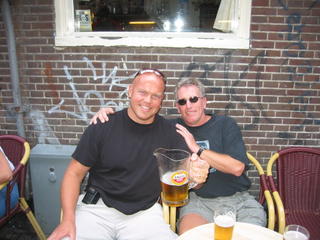 If you're a man, you're in Amsterdam, you're under six-feet tall, and you're using a public urinal - then, you're standing on your tiptoes right now. Yes, this was one of the many amazing discoveries I made this past weekend during my 52-hour stay in Amsterdam. For the record, Dr. John and I actually stayed in Utrecht, but we DID spend a lot of time in Amsterdam sitting at sidewalk cafés watching life pass us by. And you know what? We had a damn good time doing it! Plus, we made some other discoveries (along with the abnormally high urinals):

Amstel tastes better than Heineken! Maybe it was the fact that Dr. John and I found a bar (first picture) that served up the Amstel in pitchers (Pitchers are unheard of in Switzerland!), but we definitely liked the Amstel better. It's just our opinion, but we're stickin' to it!

brits...Brits...BRITS!!! Everywhere!!! I'd swear that I heard more Brits than Dutch in Amsterdam. It was amazing. Plus, it seemed like most of them were on the cheapest possible vacation package that money could buy. We spoke with one British couple. They took a boat from some point in England, it arrived in Amsterdam at 8:00 a.m., they had about six hours to spend in Amsterdam, then it was back to the boat to head back to England. Uhhh....What's the point? The lady said it only cost the two of them 180 pounds. I said, "...that much?!?!? All that work for six hours in Amsterdam?!?!?!?" She didn't seem too pleased. 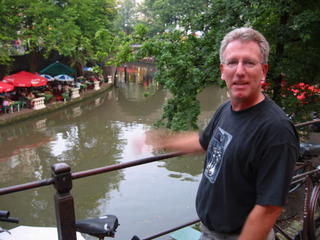 Amsterdam is cheap! At least, it's cheap compared to Switzerland. On Sunday, after Dr. John had already left to return to the U.S., I went to a food stand to buy a snack. The guy said 2.40, but I thought he said 12.40. I gave him a ten and a five. He handed back the ten, and said he just needed the five. "We are not expensive - just good!" was what he said. I told him that I would have paid 12.40. He asked me, "...Where are you from? Switzerland?" Hmmm...how'd he know that?

Amsterdam is a great place to go with no plan whatsoever! That's what we did. We were never bored, we never went hungry, we never went thirsty, we (almost) never got lost, and we didn't get arrested. We were also pleasantly surprised by Utrecht. We had to stay in Utrecht because Amsterdam was all booked up due to a convention, and we found it to be really nice. They have all these restaurants lining the canals (second picture), and there were many great places to enjoy a bite to eat. Also, everybody was speaking Dutch. It wasn't touristy at all which balanced it nicely with Amsterdam. It really felt like we were in the Netherlands. I don't know if I'd stay there again, but I'm glad we did. 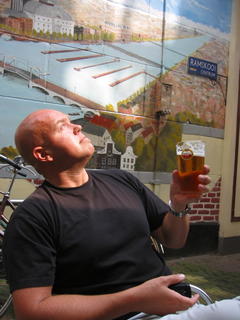 I really have no complaints. OK...maybe one. I could have learned to speak Dutch in the time it took me to get to my gate at Schiphol Airport, but that's just TBF being picky. It was great seeing Dr. John again, it was nice going to Amsterdam for the second time in less than six months, the weather ended up being much better than expected (third picture), but...I'm also glad to be back at home. Mrs. TBF had a "successful" shopping weekend in Milan and a nice time with the girls, but I think she's glad to be home too. You know what? I even think King's happy that we're back at home.
Posted by The Big Finn at 9/12/2005 10:20:00 AM

Hello Tim!!!
Happy burthday to you!
It is your birthday today!!!
I wish you the best!!!

I have no idea what a "thunder run" is. Please explain.

A Thunder Run is when you go for a drive with certain items only found legally in Amsterdam in your possession and in use. I guess it is an Ole Miss-ism...

I think the statue of limitations is up on that one so i feel safe saying it on the web.

I love how they sell contact lenses over the counter in Holland.

Mark - and everybody else that come visit us from Holland -is still amazed at the high costs of living in Switzerland. I personally love both Utrecht and Amsterdam. One for the "calmer" side and the other for the more "exciting" bits.

That's funny...the first time I used the bathroom at a restaurant in Amsterdam I came back to the table to report to Gretchen that I had to stand on my tiptoes to pee. These are some tall people.