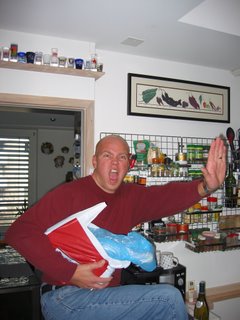 This morning, after dropping Mrs. TBF off at work and then heading just across the border into France to buy some oysters at Géant, I stopped at Metzgerei Lang to pick up the turkey I ordered last Friday.
I ordered (in German, I remind you), a 7-9 kilo fresh turkey. I left the butcher shop mit ein bischen angst because I wasn't 100% sure if I had conveyed my order to them correctly. So, there was quite an audible sigh of relief from yours truly when the butcher immerged from the cooler with what ended up being a 7.795 kg./17.15 lb. fresh turkey.
I touched the bird and said "...ahhh, sehr frisch!", and I think he said something to the effect of...the turkey having still been alive twenty-four hours ago. Yeah, baby!!! This gon' be some fresh bird!!!
And, did I call it or what..??? The price for this sehr frisch truthahn was...(drum roll)...was......144.20 CHF!!!! That's $109.35 U.S., $128.23 CAN, or 93.04 Euro for this beautiful bird (with which I was doing the Heisman pose in our kitchen) that will be enjoying a smoky sauna on the Weber grill tomorrow afternoon. That comes out to $6.38 U.S./lb. How much does a fresh turkey from a butcher in the U.S. cost these days? 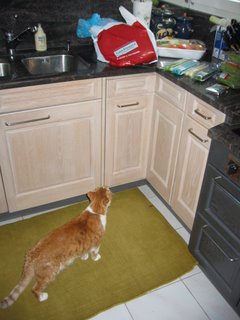 I put the turkey on the counter (...oh,oh!) so I could put the oysters in the upstairs "beer refrigerator", and I came back to find that "the Kinger" was giving his "pop" a good taste of déja vu! If you'll recall, it was just a week ago that King's cravings were leaning more toward the foie gras. I'm happy to report that the bird was saved in the nick of time, and is now resting comfortably in the "beer fridge" just under the oysters.
I'll head to the local Coop in a couple of minutes to pick up one or two things that are left on the shopping list. Then, I'll be heading off to the gym to work off as many calories as I can before the weekend gorgefest begins. I weighed in at 225 lbs. this morning (down 25 lbs. since September 5th). We'll see how much I weigh next Friday!
Posted by The Big Finn at 11/25/2005 05:55:00 AM

I so miss everything about the Basel area. I wish I knew how much a turkey costs here in Canada but I haven't had one yet. But I could have sworn a few years back it was something like $20-$30 for an entire turkey in California.

Nice pose by the way. You look ready to run with that turkey.

Every time I see pictures of King, I get the feeling that it is his house and that y'all just live there.

True! We've always said that we paid the mortgage/rent for our pets.

Well I paid $18 for a 13lb Fresh Butterball Turkey.

It wasn't as fresh as yours...but I did see Organic Turkey's at Whole Paychecks last week for $7 a pound and Tofurkey was $8 a pound!

Be glad you're not tofu.