Chur: A Hint of Soul!

Yes...Yes...YES!!! I'm happy to report that I found a hint of soul in Chur. Not a lot, mind you. However, enough soul to give me hope for other areas of Switzerland that remain by me, as of yet, undiscovered. I can't really put a finger on it, but I sensed something when I was there - something that I don't feel in Basel. People were walking down the street smiling and laughing, the town seemed to have a relaxed vibe, and I heard people speaking Romansh which seemed to add a certain exotic feeling for me. I've heard Romansh described as sounding like people speaking Spanish with a German accent, and I have to say that that isn't to far off from what I heard. Chur was cool...it's going to require a return visit with Mrs. TBF.

So, the day started out on Friday morning with me taking the 9:07 direct train from Basel to Chur. For those of you who live in Switzerland, let me recommend the current Special Offer Day Pass which is on offer until December 17th. The 1st class day pass (TBF: too big for 2nd class) is normally 90 CHF, and is currently 59 CHF - such a deal (seeing that this round-trip would normally have cost 98 CHF)! The only stipulation is that you can't use it before 9:00 a.m. on weekdays. Hence, the reason for me taking the 9:07 train. 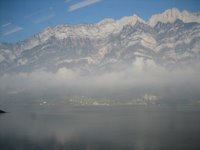 Anyway, I had a leisurely 2.5 hour ride down to Chur. The sun was shining, the sky was blue, I was listening to tunes on my iPod, and just taking in the great scenery of the Graubünden zipping by.

After arriving in Chur, I went directly to the Tourism Office to pick up a map and a little guidance. I already knew at which restaurant I wanted to eat, so the friendly lady in the office pointed me in the right direction, along with telling me about the "must see" places on the map. I was off into the sunny, bustling streets of Chur. Noon was approaching, so I went directly to the restaurant at the Romantik Hotel Stern, where I enjoyed a really nice lunch consisting of regional food and wine. 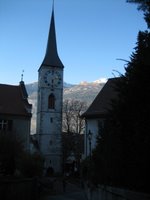 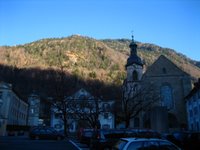 While I was eating my lunch, I looked out the window and was surprised to see that it no longer appeared to be sunny. I thought it was strange because there had hardly been a cloud in the sky when I had walked into the restaurant twenty minutes earlier. However, after lunch, when I walked out into the street, I looked up and saw that the sky was totally blue. The mountains in the background were were in complete sunshine, however the old town where I was standing was completely in shade. I soon came to discover that the sun, at this time of year, goes behind a mountain a little after noon and stays there until...late afternoon. The weather forecast had shown sunny weather with a high of 15˚C/60˚F. However, I'm telling you that it felt like the temperature dropped 10˚C with the old town shrouded in shade. Plus, taking pictures of the old town became a bit challenging. 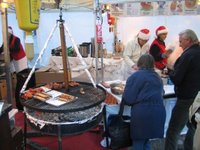 In spite of the cold, I still managed to enjoy my walking tour. Chur boasts having the largest Christmas market in Switzerland, and I have to say that I was pretty impressed with the fact that a lot of crafts being sold looked like they had actually been made by local artisans (...instead of in China). Plus, there was a lot of food for sale (nice grill!). 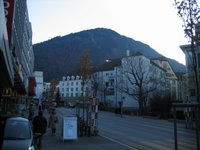 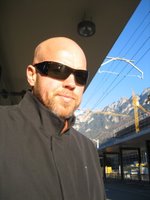 Eventually, the cold got to me (I hadn't anticipated needing a heavy coat), and I decided it was time to head back to the train station. Here's a picture I took of my nemesis - the sun-blocking mountain. I took the picture at exactly 3:00 p.m. As you can see, the street lights are on, for god's sake! Naturally, when I made it back to the train station it was - you guessed it - gleaming in bright sunshine. I stood next to the station and thawed my frozen bones before jumping on the 3:15 train back to Basel.

I hear that the people of many such moutainy places like that (Graubünden, Wallis) suffer from seasonal depression, something like the nordic coutries have, because of the lack of sun during the winter months. However, for a tourist, these places are always worth a stop.

CS - I always thought that St. Moritz was considered the place to go to enjoy winter sunshine. I know that just about every time I watch a ski race on TV from St. Moritz that it's usually sunny with blue skies.

You guys must go to Arosa if you head towards Chur again. Take the little train up there -- and definitely try to go in the summer. I made a day trip to Arosa and am looking forward to going back someday with my SO. I love the day-tripping possibilities in Switzerland! I get a one-month GA in the summer, and travel around. Lovely!

I'd have to say that does look like a good report. The only time I stopped in Chur was on the way up to the ski hill.

One disappointment: you said the christmas market was great, where's a pick of it???

I'd probably venture to say it must be very nice in the summer months.

by the way - those deals are really good if they work, but don't forget a day pass which can be cheaper too!

for going from Basel to Chur round trip..

anon - Good idea regarding the one-month GA. I'm going to have to look into that.

ET - The Christmas market was in dark shade, and they didn't have their lights on. The pictures were too drab to post.
Also...did you actually read my post? "Those deals" were day passes. There's currently a "Special Offer Day Pass" through December 17th...I paid 59 instead of 90, and the round-trip Basel/Chur would normally have cost 98. Let's pay attention, people...

lol - I did pay attention...just noting the normal pass. I used to look for those daily deals, trust me.. I read it.. ;-)