A Night Out Wit' Da Kids!

Mrs. TBF and I met Barry and Eva for dinner at Basel's Fischerstube restaurant/microbrewery last night. Of course, I suggested Fischerstube not knowing that Eva doesn't really drink beer, but I had never met her before so...who knew?

You may recall that Barry and I met up for the first time back in September. Eva had not yet arrived in Switzerland, and Mrs. TBF was away on a business trip. I went home that night, after enjoying a couple of beers and a nice meal with Barry, feeling a little old when I realized that I was 17 years old when Barry was born. Hence, the nickname "da Kid" was born.

Last night, after realizing that Mrs. TBF and I were already dating before Barry and Eva had even begun school, I decided that THEY are now "da Kids"! I guess my lack of maturity tends to lead me to believe that I'm still in my twenties. However, when I take time to think about it I reluctantly have to admit that I was already well into my twenties half my life ago.

Like sand through the hourglass, so are the days of our lives...

We all enjoyed a very nice meal at the Fischerstube. Eva enjoyed some "bambi" off of the game menu along with her...white wine, and Mrs. TBF, Barry, and I each ordered the Suuri Kalbsleberli (calf liver) with Rösti, along with a couple of beers each. I hadn't been to the Fischerstube for quite a long time, and I forgot how good their beer can be. We're really going to have to make an effort to go there more often. 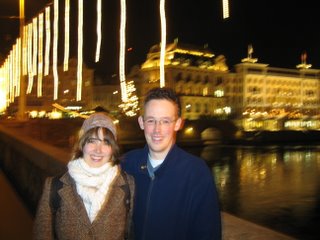 So, being a "school night", we called it a night fairly early. On the way back to our bus stop, I snapped this picture of "da Kids" on the Mittlerebrücke with the Rhein and the Hotel Les Trois Rois in the background. The picture is a bit shaky because I was freezing my arse off and I had a couple of beers in me. Nevertheless, I think the picture turned out pretty well even though it looks like a light ray coming out of Barry's head is about to beam him back up to the mothership.
Posted by The Big Finn at 12/14/2006 05:05:00 AM

Go South in Winter and North in Summer, My Good Man.

Go to Finland in July!

I got my picture on TBF central! I like the light rod in the head. I like to think of it as a wayward halo. Angelic but with a little twist. Great meeting up with you and Mrs. TBF last night, enjoyed the meal, beer and company! See you in January

Barry needs to change his screen name to "da Kid."

gl - I've only been to Finland during the summer. We really do have to go during the winter sometime so that we can experience the 20-hour nights. However, I don't think I'd go to Finland during Christmas; I have a feeling that too many restuarants and shops would be closed.

da Kids - We also had a great time. See you next year. Have a Merry Christmas.

cs - yes, you will! Have a great time in "the Great White North!"

et - My advice is never to go to Helsinki during the mid-summer festival in late June - the city shuts down!

Enjoyed meeting "Da Kids" too! But, I have to admit that when I said something about how many years TBF and I have been married, I felt REALLY old! Oh well, I may be a bit more mature than TBF in the work setting, but I still feel I'm in my 20s when I'm having a good time.