On The First Day Of Christmas, My True Love Gave To Me...

...a fat cat in a Christmas treeeeeeeeee!

Yes folks, King da Cat used to be a tree-sitter. More specifically, he was a Christmas tree sitter - meaning: he literally liked to sit in our Christmas tree. We're talkin' maybe twelve years ago, or so.

Back in the early to mid 90s, we had an artificial Christmas tree. As you may have read a few days ago, I despised the whole going out to buy the Christmas tree thing. So, Mrs. TBF and I thought that maybe an artificial tree would be the solution to my woes.

First of all, the box that the artificial tree "rests" inside of for eleven months a year takes up A LOT of storage space (think, small sofa). Second, there's the whole ordeal of assembling the blasted thing. Third, they often look like crap after about the second year, and finally...King liked to sit in the tree.

The fake tree's soft fake needles were the problem.

Mrs. TBF and I would go upstairs to bed, and about three minutes later we'd hear ornaments jangling and eventually falling to the hardwood floor. Then, King would settle down for a long winter's nap about two-thirds of the way up the tree on those nice soft, fake needles. I didn't realize what he was doing until I came downstairs early one morning to make some coffee, turned on the kitchen light, and then heard a rustling noise coming from the direction of the Christmas tree. I looked into the family room, and I saw two eyes glowing at me from inside the tree. Then, I watched as "the beast" climbed down from the tree, somehow avoiding becoming entangled in lights and tinsel, and came bounding toward the kitchen for more chow to fill his (back then) 7.5 kilo/16.5 pound frame.

By the end of the second Christmas season, King - with his considerable girth - had bent the branches so badly that the tree no longer looked like anything remotely resembling a pine or fir, so we got rid of the tree. I seem to recall that we gave the tree to charity.

Thus ended the short-lived era of the TBFs having an artificial Christmas tree.

The next year, we began "TBF's own special torture" of driving up to Wisconsin to cut down the tree. As you know, I hated it, but there were two (and ONLY two) elements of the process that I actually enjoyed: eating brunch at The Abbey in Lake Geneva, WI after performing holiday-sanctioned deforestation, AND taking off my glove to touch the branches of each potential tree so that I could pick the one with the sharpest, cat fur piercing needles. If it drew blood on my palm, then it had potential. I didn't care how the trees looked.

They all looked the same to me.

We drove home after brunch that first year - Mrs. TBF glowing with the Christmas spirit, and me with a belly full of corned beef hash, a mouth spewing piss and vinegar, and bloody palms from the sharpest pine needles ever produced by nature.

Another Norman Rockwell painting going up in flames...

The tree was set up in the family room in its usual spot. Shortly thereafter, King entered the room, let out an excited cackle when he saw that season's manger, gave it a poke, hissed, and ran for dear life. Success! The tree-sitting era had ended, and the knock-off-a-low-hanging-ornament-and-roll-it-around-on-the-floor-all-night era had begun. But...I won't bore you with the details. 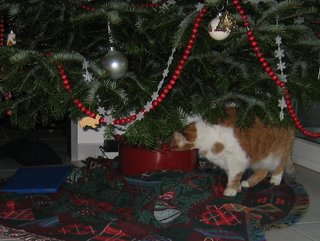 The years have come and gone, and now King - our big buddy - lives out his twilight years in Switzerland with his tree-sitting days but a distant memory. Although he's still in pretty good health, I doubt he could climb a tree today even if he wanted to. Afterall, he is over eighteen years old. These days, all he pretty much does is sleep, shed on the furniture, eat, puke up hairballs, stink up "da joint" wit' his poop, pee, track litter around the apartment, and drink...

...the water from the Christmas tree stand.

lol - drinking the water.. It's got stuff in it that makes it smell differently? I dunno.. our spunk enjoys the bathtub, so who would know that???

King, you truly are a card. However, as you are my arch-enemy I must enjoy your eccentricities from a safe distance.....

p.u. - I noticed that your profile says that you can't read. So, how then, do you know that King is a "card"? Also, how are you able to write if you can't read. I think that is highly improbable.

You know Big Finn, I have decided that since I now find King rather enjoyable that you are my arch enemy. Although I did used to enjoy our wrestling matches. I do however remember a certain large Scandanavian (and don't say you are not Scandanavian) putting me in a crate whilst he was baby sitting me. I did however enjoy the salad I stole. Speaking of salad, I think I'll go toss my own right now. Shalom!

What have you been up to? Not blogging, I see. When's the next one coming?

Well, at least he's no longer climbing up the tree ;)

TSK - It's coming soon. We just finished breakfast, then a little shopping, and then a little blogging before our Christmas Eve dinner.