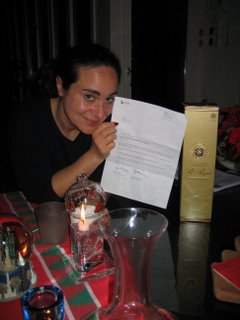 Last Friday, as I was walking into the front lobby of our building, I saw the mailman putting a box into our mailbox. As far as I know, we weren't expecting a package, so I couldn't imagine what it might be.

It turns out that it was addressed to Mrs. TBF, and made kind of a glugging noise when I shook it. "Ahhhh...somebody very thoughtful sent us the gift of liquor," I thought, and I brought it up to the apartment.

When I got into the apartment, I opened the box (had to make sure it wasn't a bomb or anything like that...just looking out for Mrs. TBF), and I discovered that it was a bottle of Pol Roger Brut Chardonnay 1998 vintage champagne. I figured it was from some secret admirer of Mrs. TBF's and I figured that I'd...confront her the moment she got home, find out who the culprit was, and...then...KILL HIM IN THE MOST GRUESOME AND PAINFUL WAY KNOWN TO MAN!!!...

My snooping has its limits, so I didn't open the card. I just set the box aside and really didn't give it one iota of thought until several hours later after Mrs. TBF got home and asked: "What's this?"

"Somebody sent you a bottle of very nice champagne," I told her. "Who?" she asked. "Well, how the hell should I know? Open the letter," I bellowed...with clenched fists. She did, and here's what the letter said:

A gift for you from your UBS MasterCard

You use your UBS Mastercard regularly and are among our best clients. To thank you for your loyalty and the trust you have placed in us, we are sending you a bottle of Pol Roger Brut Chardonnay 1998 vintage champagne [See? Didn't I tell ya?].

Enjoy the freedom of cashless payments the world over [blah...blah...blah].

Naturally, I had to go to the Mövenpick Weinkeller website to check out how much our "loyalty and trust" is worth to them, and a little Friday evening research (martini in one hand, typing with the other) revealed that it's worth about CHF 72 (about $57). Not bad...not bad at all.

We couldn't believe it! We just switched to this new credit card in July or August, so with just a few month's worth of purchases we appeared to have reached "..among our best clients" status. Da-amn!

Mrs. TBF wants to send them a thank you letter (she's nice). I'm already trying to imagine what kind of gift we'll receive next year with a full twelve months of purchases under our belts (I'm an ass!).

Has anyone ever heard of anything like this? I mean, we used our U.S. credit card waaaaay more when we lived in the U.S. and never received peep. Now we're getting a freakin' bottle of champagne. Go figure...

GLH and I used our new Continental Miles card to purchase all of the furniture for the new apartment. We've had the card about 2 months and we are already at Elite Pass status!

A friend of mine once got into trouble at work because a vendor she worked with during the year sent her a bottle of whiskey for Christmas. Liquor is strictly prohibited. Even though she had nothing to do with the liquor coming into the office, she still received a reprimand. And she doesn't even drink whiskey!

Hey, UBS has never sent me anything! That's it, I'm switching to Basler Kantonalbank...

I once got a keychain from Discover Card...but found out that a mini-version of their credit card was attached. I was afraid to use it because what would happen if I lost my keys?

kirk - I guess Mrs. TBF's name carries a lot of weight with UBS.

michael - I'll mention it to my sister-in-law...she works for Discover.