One Helluva Nice Crib You Got There, Joe...

We visited the Vatican when we were in Rome nine months ago. However, it seems that, since Mrs. TBF is Catholic, visiting the Pope's house is mandatory...EVERY SINGLE TIME we go to Rome; so, we went. I actually didn't mind going since it is pretty damn (oops!) impressive, but I agreed to go only under one condition:

Mrs. TBF agreed to my terms, and then suggested that - since it was such a beautiful day - we should head on up to the top to take in the panoramic view of Rome. 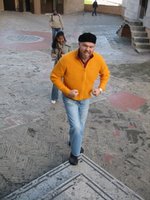 After wandering around St. Peters for a few minutes, we finally found the right spot for heading up to the cupola and found out that we had a choice: 4 euros for hoofing-it all the way up a zillion stairs OR 7 euros for the right to take an elevator and then hoofing-it up 330 stairs. NO BRAINER - we chose the latter, paid our 14 euros and jumped into the elevator after waiting only a few minutes in a VERY short line (FYI: This is a great time to go to Rome...very uncrowded!), walked over to the first of 330 stairs, and up we went after I blurted out a rather over-confident "...let me at it!" 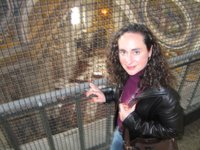 "What the hell was I thinking?!?!? I'm afraid of heights!..." I exclaimed (probably echoing through St. Peters) when we reached a point, after going about three-quarters of the way up, where one could look down a few hundred feet to the tourists (who looked like ants) below. Seriously...I was feeling light-headed. However, being the trooper that I am, I somehow managed to snap a (trembling) picture of Mrs. TBF...while keeping my back pressed against the wall. 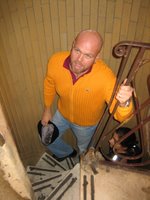 I have to say that all my workouts on the elliptical trainer have paid off. I made it to the top without breaking a sweat. Yes, I was "dewey", but I wouldn't say that I was sweating. I did have to take off the hat, but there was no mopping of the forehead. Mrs. TBF was in front of me most of the way. I told her it was so that she could take a picture of me as I conquered the summit, but it was really so I could just look at her butt all the way up.

Yes...in a house of worship. I'm definitely going to Hell! 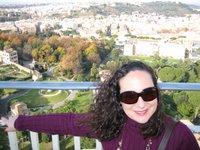 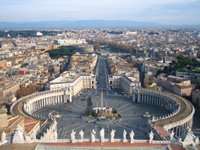 We went outside where we enjoyed the cooling breeze and sunshine. The height wasn't bothering me out there, so we ended up staying outside, enjoying the view, for about ten minutes before heading back down.

What a great feat! Beautiful pictures...I'm surprised that Rome is quiet this time of year, I would have figured it was their "festive" time.

BTW, I LOVE that orange sweater!

Michael - We were also surprised at how uncrowded Rome was. Also, it's not very decorated for Christmas - very few lights, Christmas trees, and we didn't see even one Christmas market. The lights that were put up didn't go up until the 23rd; unlike here in Switzerland where the Christmas decorations have been up since October.
I guess the Romans are in touch with the true spirit of Christmas.

We just went to Rome for the first time a month ago and loved it. Sounds like you are having a great trip - not a bad way to spend the holidays. All the best in the New Year!

It seemed like half the men in Venice were wearing orange over Christmas...is that an Italian thing, or is orange the new black?

Oh, and I also did the cupola climb at St. Peter's a few years ago, only it didn't occur to me that it probably wasn't the best thing for a borderline claustrophobe, plus it was like 92 degrees and humid in mid-July, and when I got to the top it was too hazy to see much beyond the Tiber. Good times all around...

interesting that with your knees going down was easier. my dad always had more trouble going down stairs rather than up.

Looks like the climb up was worth the excellent view, and no crowds... nice!