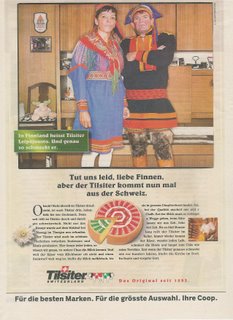 This ad was in last week's Coop (Swiss grocery store chain) Zeitung. Apparently the people at Tilsiter (cheese) of Switzerland felt the need to poke some fun at the Finns. Now, I can take a "joke" (contrary to what some people say about me), but there are a few inaccuracies that need pointing out.

First of all, the green box in the ad states that "In Finland, Tilsiter cheese is called Leipäjuusto. And that is exactly how it tastes." The bold print under the picture states: "Excuse us dear Finns, but Tilsiter comes simply from Switzerland." Now, my German isn't the best so I called Canadian-Swiss and read the ad to her to get her opinion. After reading her the ad over the phone in my "completely unaccented" German (HA!), she kind of validated what I thought I was reading: the ad seems to be implying that the Finns stole Tilsiter cheese from the Swiss and renamed it Leipäjuusto.

To begin with, Leipäjuusto is not the what the Finns call Tilsiter. I've had both cheeses, and I can tell you first hand that they are not the same cheese. They have completely different flavors and textures. The first sentence is incorrect.

Also, I'm not really sure what is meant by "...and that is exactly how it tastes." The word Leipäjuusto actually translates to "bread cheese". Are the people at Tilsiter implying that the Finnish cheese actually tastes like "bread"? If so, most people in Switzerland won't understand the "joke"...because most people here CAN'T READ FINNISH!. Or, are they implying that it tastes exactly like Tilsiter (it doesn't)? Not sure...

Then, there's the picture of two Sami people (I've come to find out that it's apparently no longer politically correct to call them Lapplanders...who knew?). Is it really accurate to represent "the Finns" with a people that make up 0.14% of the total population of Finland? It would be similar to the Emmentaler cheese people having an ad with picture of a Native American (I called them "Indians" when I was a kid) in a tee-pee, stating that Americans call Emmentaler "Swiss cheese", and then going on to say "...Excuse us, dear Americans..."

Finally, is Tilsiter really a Swiss cheese? Yes, it's currently produced in Switzerland. Yes, it was originally created by Swiss people. However, it was actually created by Swiss people who had settled in East Prussia in the mid-19th century. It's East Prussian cheese, for God's sake! Leipäjuusto, on the other hand, has been a part of the Finnish diet for hundreds of years. Maybe the Swiss are the real guilty party? Tut uns leid, liebe Schweizer, aber der Leipäjuusto kommt nun mal aus Finnland!

OH...MY...GOD!!! The Tilsiter people are taking-on the Russians this week?

ok - this is pretty funny. I like your point about the Indians as north americans...

I haven't had trouble with reg blogger but if you have to enter your name into this thing, it's over...

Now that I've actually read the ad, I see that they're promoting the "real" Swiss products (powdered milk = Nestle). Still, I think it's a very strange way of advertising it.

That IS very odd. I read it as well and can't really make sense of why they feel the need to make fun of the Finns. Boycott Coop, I say!

Cows are called "Chue" in Switzerland? How cute.

And this, my friends, is why I say no to cheese. It just causes international discontent.

As a fellow Coop magazine reader, I also saw this ad and have been waiting for you to blog about it! I thought of you right away when I saw it. I'm just so glad to know a Finn.

I'm assuming you mean me when you say, "contrary to what some people say..." This blog proves I am right.

Still love ya, my friend!

TSK - Actually...I didn't mean you. I was just having a conversation with somebody the other day (who reads this blog but doesn't comment), and when I challenged something this person said about me, he/she said, "...just joking...come on, learn to take a joke!"
Wait...you also think I can't take a joke? I guess I'm going to have to work on this character flaw of mine...
:-(

How dare you accuse yourself of not being able to take a joke! You are supreme!

I know too...and you took mine well.