That's what I call Jo, my mother-in-law, during the Christmas holidays.

Oh, and by the way...I wrote "Don't let Jack Frost nose your nips" in her Christmas card. I wonder what she thought of that...

I never got any feedback.

Anyway, we bought Jo-Ho-Ho a postcard in the Vatican giftshop. I could have bought it from a couple of different employees in the shop, but I chose to buy it at the cash register where a nun was working. When she handed me my change, her hand touched my hand...

That's gotta bring me some kind of good fortune...right?

I walked outside and told Mrs. TBF that the "Penguin's" hand had touched mine, and she didn't think it was that big of a deal. Oh well... 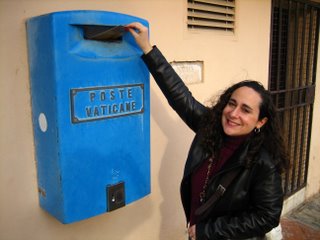 Then, we noticed a mailbox right outside the giftshop. I told Mrs. TBF to write out the postcard while I went back inside to get a stamp so that we could mail it from a Vatican mailbox where it would get a Vatican City postmark - I figured Jo-Ho-Ho would like that.

A couple of minutes later I rushed outside all excited and informed Mrs. TBF that "...the Penguin touched my hand again, and I don't care what you say...but...that's gonna bring me some luck...dammit!" At that point, Mrs. TBF reminded me that: ONE - we were at the Vatican and I shouldn't swear, and TWO - she, being a product of Catholic schools, had probably touched a nun...oh...I don't know...a thousand times, or so.

So, getting back to where I was going with this post...

Mrs. TBF being the good daughter that she is, thought it would be nice to send her mom a picture of Pope "Joe" praying at the grave of Pope JP II since JO-HO-HO WALKED RIGHT PAST JP II'S GRAVE LAST MARCH WITHOUT EVEN NOTICING IT...EVEN THOUGH IT WAS PROBABLY ONE OF THE THINGS SHE MOST WANTED TO SEE WHILE IN ROME.

"When are we going to see John Paul's grave?" she asked about twenty minutes after walking past it. I came back with: "What? You're kidding, right? You know it was that big marble slab on the floor, right? You know, the one with the security guards, where the crowd was, where everybody was taking pictures...?"

So...I know it's not quite the same as seeing it in person...but a postcard of the gravesite, with the current Pope, and a Vatican postmark is pretty good...right?

Uh oh...you touched a penquin, I went to mass...what is this world coming to?

sounds like you're both up sh!t's creek without a paddle. ouch!