Here's a picture of Conrad Schumann running to freedom (and for his freakin' life!) on August 15, 1961. While we were walking around the eastern part of Berlin, I asked Mrs. TBF if she had ever heard of anybody "escaping" from The West to The East. Just wondering... 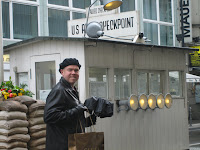 Here's a picture of "capitalist pig" TBF on February 26,2007 leisurely walking in pretty much the same spot carrying his new shoes that he just bought a few hundred meters up Friedrichstrasse. What a difference 45+ years makes!

How long will it be before I can calmly board a boat in Havana (with a couple boxes full of Cuban cigars) and take the short cruise back to Florida? Only time will tell.

You do know what the Berlin wall was called in East Germany don't you? Antifaschistischer Schutzmauer - the Anti-fascist protection wall. They told the East Germans that they put up to protect them from the fascists in the west, which would make sense except they let the so-called fascists in all the time and wouldn't let those folks living in the good ol' land of socialism out.

Living in the former East Germany, I learn the goofiest stuff.