The reason why I'm flashing-back to March, 2003 is because that was the last time that Mrs. TBF and I were in Madrid. I can't believe it's been four years!

Four years ago, my sister, my bro-in-law, and their (at that time) three kids were living in Madrid due to my bro-in-law's two-year expat assignment with a major Chicago-based electronics/communications/etc. company. We knew they would be heading back to Chicago in a few months, so we decided to make one more trip to Madrid; which we thought would be our last.

No, we having nothing against Madrid. However, we had already been there a couple of times before that (including driving there from Basel - with our dog - for Christmas in 2001), and we just thought there was no reason for us to ever return.

I guess the word "met" isn't exactly accurate. I mean, we've never met him face to face, AND we've never even spoken to him. However, we have left comments on each others' blogs, and we have exchanged a few e-mails. As far as we're concerned...that's reason enough for us to take an easyJet flight from Basel to Madrid tomorrow morning so that we can meet the blogging legend in person and turn the "virtual" tapas bar into a "living and breathing" tapas bar. By tomorrow at this time, the three of us will be in the midst of a tapas bar crawl to end all tapas bar crawls!

We are REALLY looking forward to it!! 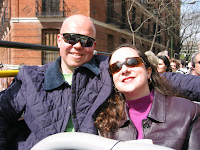 So here, for your viewing pleasure, is a picture of Mrs. TBF and I taken in Madrid on March 22, 2003 while riding on one of those double-decker, tourist buses. I have to admit, that we both weighed significantly more at that time (I think our combined weight loss is equal to one-half of Sal's total body weight!), and it took quite awhile for me to find a picture where the camera angle had an acceptable slimming effect on our bloated faces. I'd also forgotten how long Mrs. TBF's hair was back then...wukka, wukka, chukka, chukka...Wow!

My overnight bag is packed, the weather forecast for Madrid is looking good for the whole weekend, and I can already taste the tapas and Spanish wine! Plus, I think they have Dunkin' Donuts in Madrid (added bonus!).

"Sal the blogging legend?!" I like that. But...with a title like that, I really ought to be seeing monthly royalty checks in my mailbox.

Anyway...all 139lbs. of me is ready and waiting for the royal family's arrival. I have a list of bars. I have map. I have a metabolism to rival the Road Runner's. We're all set, Finns.

All you need to do is show up.

I prefer topless bars to Tapas.

Sal, I hope your lesion gets better.

What fun...and you get to add another person to the list of people you've met in real life!

TMS - Bottomless bars are better, oh you were talking about girls weren't you?

We'll be expecting a full, detailed report of what we missed out on.