Wonder How You Manage To Make Ends Meet... 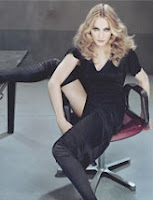 I would just like to take a moment to thank Madonna for demonstrating that one can clearly NEVER HAVE TOO MUCH MONEY! Yup...that's right! The "...richest female singer in the world...with an estimated net worth of over $850 million" has now decided that she needs to put out her own clothing line in association with a large, Swedish retailer.

Now, I have nothing against Madonna at all. Actually, I like a lot of her music (although I think most of the stuff after Ray Of Light - my vote for her best album - has been pretty mediocre). But, does she really need to be on EVERY OTHER BILLBOARD IN BASEL??? By the way...very ladylike pose you got goin' on there!

It almost seems to me that it's gotten to the point with Madonna that the public no longer really cares about her music, yoga, movies (Doh!), children's books, fashion, or whatever else she's into these days. All the public really cares about is...if she's still looking good as she approaches fifty. For the record: she is.

I don't think I can come up with a single song of hers that I like.

She does look darn good tho.

I myself am a fan of the movie that she did with Willem DeFoe.

I do like some of her music. As a matter of fact, I am VOGUEING as I write. Which is difficult since I need both hands to do both.

Oh jeez...that woman could bore me into a coma.

the H&M in Geneva is predicting madness (this morning?) when her clothes come out in the store.