That's what Gretchen said after I answered the phone at 7:10 a.m. - I was supposed to be at the Expatters' house at 7 a.m.

Yes, I remembered to turn the clocks ahead. Yes, I set the alarm on my watch. But, I guess I just didn't hear the alarm go off at 6:15 a.m. Oops!

I got ready in record time, and was walking out of the front door with a cup of coffee in hand, before I was even fully awake. A few minutes later, I was pulling up in front of KGB's house at 7:30 a.m.

About fifteen minutes later, after loading up the cars, we were off to the airport; Kirk and Baby in a rental car, and Gretchen, me, and Grady in the Jeep. 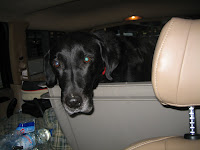 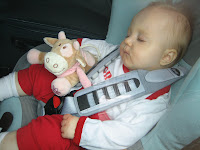 The ride to the airport was very uneventful - Grady was very well behaved, and Baby was fast asleep when we pulled up at Departures. All the luggage and Grady's crate (which is the same crate in which we brought Dominique to Switzerland) was loaded onto a big cart, Kirk dropped off the rental car, and I brought Grady out for one last Swiss pee. 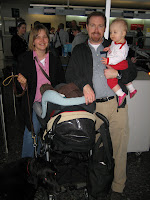 There was time for one last photo of the Expatters in Switzerland, and then it was time to say goodbye.

How sad that the Expatters are gone!

And flying out on clock-changing day is some serious living in the danger zone... I came close to missing my connecting flight in Atlanta last week because Delta told us the wrong local time there before we landed. So apparently I'm not the only one who's oblivious to these things...

Back home. *sigh* That's where I wish I could go.

Luckily, you didn't forget anybody. I'm sure it was a bit sad to say goodbye, though.

Wishing the Expatters all the best!

7am in the morning whether the hour has gone forward or back is tough! Shame they've gone back, we need as many expat bloggers as possible. So we can organise more get togethers!!

I hope you're travelling well.

Oh wow - it is sort of sad.. Packing up and starting again...

Great pics and luckily everything worked out well!

Thanks again for waking up at the crack of dawn (with a little help) and driving us to Zurich!