Madrid: At A Loss For Words...

Wouldn't you know it? Sal did such an all-encompassing recap of our meet-up in Madrid that...I'm kind of at a loss as to what I can add to the story. I think I'll just post a few pictures, and we'll see where things go from there. 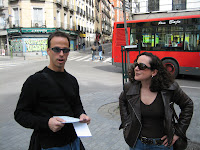 My first impression upon laying eyes on Sal in the flesh was that "...not only is he a blogging legend, but the guy doesn't have an ounce of fat on his body. He looks like he runs two or three marathons a week!!" I like this picture, because I'm imagining that Mrs. TBF is thinking: "...I've gotta feed this guy some pasta!" Then, he whipped out a map with the locations of tapas bars highlighted in neon yellow ("...organized...like me!"), told me that he had his GPS in case we got lost ("...borderline obsessive...like me!"), and...off we went! We were in good hands. We were in SAL'S hands! 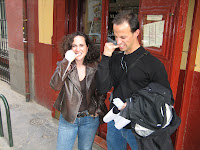 I took this picture after our second stop. Mrs. TBF and Sal didn't really have anything between their teeth, but I thought that it would make a good picture and I asked them to pose. Of course, I strategically told them that I would take the picture of THEM; thus, avoiding looking like a dork! 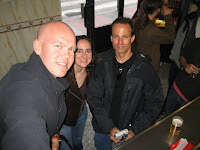 This picture isn't very good, but it's the only picture I took where the three of us are together in the picture. We were at the little tapas bar that wasn't on Sal's list into which we had just randomly walked on impulse. Standing in front of this little neighborhood place, I said, "...I'll know it when I see it, and...this...is...it!" We decided to try it, and it ended up being very good; a real find as far as I was concerned! I loved the razor clams, snails, peppers, sweetbreads, and pig ears. 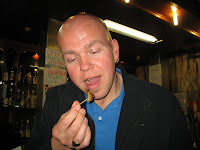 MMMMMMMMMMMMMM...pig ears! I've had pig ears at a fancy restaurant in Paris and in the little local neighborhood place in Madrid. The Madrid ears were much better; and, they were a fraction of the cost of the Paris ears. I'm not totally sure, but I seem to recall that I was nearly weeping when this picture was taken as I ate my last pig ear.

I only look thin because I was dressed in dark colors. When I wear white, I'm often mistaken for Rosie O'Donnell.

Thanks for a very nice, complimentary write-up.

And what a relief! Now, I *know* that I made the right decision by comissioning McKinsey Consulting to prepare that study on "Best Madrid Tapas Bars from the Finnish Perspective."

Hope we can do it again sometime, somewhere.

What a fun time! Just a question: are those pig ears crispy or squishy?

Christina - Neither. They have a nice layer of grilled fat with the slightest bit of crunchiness underneath.

Are pig ears more of a textured pleasure or do they have a unique taste?

TMS - They are basically pork/bacon-like. However, they have a very nice layer of fat which I find intoxicating!

God only knows why 'wax?' was my first thought. I do believe I may have eaten them in a big messy Spanish rice mix but they were unrecognisable.

I almost wept over the blood sausage ... because it was tasty, and because I liked it in spite of that.

I want to live in Spain ... I came away from the country certain sure.

Glad you had a nice time. I realised I was reading your comments on Sal's site but not your blog ... a big 'Doh!' from Di

WW - I can hardly feel sorry for you since Brussels is one of my favorite "eating" cities in Europe; MUCH better than any city in Switzerland! Isn't it funny how the grass always seems greener on the other side!