I'm sorry, but I'm going to have to go back to March, 2003 like I did two weeks ago. March, 2003 was a big travel month for me. Not only did Mrs. TBF and I travel to Madrid and Barcelona on consecutive weekends, but I also participated in a "boys only" weekend to Monte Carlo.

It all started when a friend from Chicago - Dave - called to tell me that he had to go to Cannes for a conference and that I should meet up with him in Monte Carlo the weekend before his meetings. Quite frankly, I think he expected me to say "no way", but I showed him by saying, "...sure, why not?". I checked the Swiss website, saw that there was a direct flight from Basel to Nice, and booked myself a ticket.

Later that day, I mentioned the trip to my neighbor Tom (who has since moved back to the U.S.), and he said that he'd always wanted to see Monte Carlo, and could he tag along? "Sure...why not?"

Later that day, I mentioned the trip to my other neighbor Andy, and he decided that he too would come along. That's pretty much when I stopped mentioning it to people. It seemed to me like four was a good number (two guys in two rooms). I didn't mean to exclude anybody, but I think it ended up looking that way because I found out the morning that we were leaving that one of the neighbor ladies (who I guess was a little miffed that we had apparently "excluded" her husband) had referred to us as the "Elite Three" of the neighborhood. I found this all rather petty, but funny at the same time.

The name for the group had been coined: The Elite Three (or L'Élite Trois since we were going to a French speaking area) were going to Monte Carlo. Once Dave joined the group, it would L'Elite Quatre.

So, L'Élite Trois had to catch an early Saturday morning flight to Nice, France. We had decided to dress up for the trip so that we could get into the Grand Casino.

Mrs. TBF was not pleased.

"You mean, I can't get you to wear a tie to go out to dinner, but you'll gladly dress up to go to Monte Carlo with the boys? Geez!"

"Sorry baby, but this is Monte Carlo...gotta go!", and we were off! 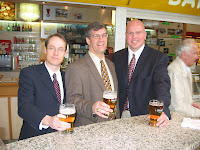 We arrived at Nice Airport about three hours before Dave's connecting flight from Chicago was due to arrive. It was only 10:30 a.m., but we noticed that the bar was open and figured that it was after 5:00 p.m. somewhere in the world...so we decided that the time was right for a beer.

I volunteered to buy the first round because I wanted to impress the other "elites" with my multi-lingual skills by ordering the beers in French. "Let's see...," I thought, "'je voudrais' is 'I would like' in French, and 'pression' appears to be a draft beer, so..."

The bartender turned around, chuckling, to pour me my beers. It was at that point that I realized my error: I had ordered three "fish" instead of three "drafts".

TBF: (in English) "Did I just order three fish?"

Bartender: (also in English) "Yes, but I understood what you meant. It was a good try!"

The rest of the weekend in a nutshell:

We befriended an Ethiopian man named Gator and his friend (some name we couldn't pronounce!) while waiting for Dave's flight. Gator was waiting for his sister to arrive from Ethiopia via Paris. He wasn't sure which flight she was on. As a matter of fact, he wasn't exactly sure on which day she was supposed to arrive. He was sure, however, that he was happy to allow "The Elite Three" to buy him several rounds of beer.

Dave borrowed a pair of Tom's pants. Tom is taller than Dave; Dave had to cinch the pants with a belt just under his nipples.

Dave and I lost...um...A LOT of money in about one minute playing Blackjack in the Grand Casino (sorry...no pictures allowed). People who congregate outside of the Grand Casino hoping to get pictures of celebrities snapped our picture as the four of us walked out. We began referring to Dave as Monsieur Clooney (because of his salt and pepper hair).

We continued playing Blackjack in another casino. Andy told the dealer at one point that he wanted to "hold". The dealer dealt another card which caused Andy to lose. An argument ensued. A mental image of Andy pointing up to the video camera saying "...ROLL THE TAPE!" will be burned in my memory forever.

Tom wisely chose not to gamble. "I've got two kids in college!"

Andy, Tom, and I went out to dinner while Dave went back to the hotel to sleep. Andy ordered a Niçoise Salad, but he pronounced it "NIK-O-SEE-A"! 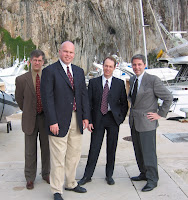 The next day, we ate breakfast, walked around the marina a bit, ate a seaside lunch, and then it was time to leave.

I cannot explain why, but it makes me uncomfortable to see you in "work" type clothes. It seems.... well.... so unnecessary. Plus, if you are going to dress up, where's da' funk?

I love this post. You are a shining star example to trailing spouses the world over...

Oh that sounds like a great time and reminded me of my visit there some 6 years ago.

"You mean, I can't get you to wear a tie to go out to dinner, but you'll gladly dress up to go to Monte Carlo with the boys? Geez!"

"Sorry baby, but this is Monte Carlo...gotta go!", and we were off!