Mrs. TBF invited several colleagues over for dinner last Thursday night. As is often the case when we are having a dinner party, I do most of the shopping AND quite a bit of the non-glamorous work (washing, chopping, setting the table, etc.).

Mrs. TBF is the executive chef, and I'm pretty much the sous-chef... 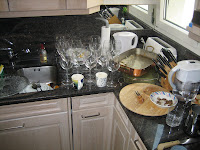 On Friday morning, as Mrs. TBF was heading off to work, she sounded sincerely apologetic when she said that she was sorry to leave me with the enormous cleanup. We're talking fine crystal, good china, etc.; all stuff that needs to be washed by hand.

...add dishwasher to the list of sous-chef duties. Doh!

Now, I know that good china isn't supposed to go into the dishwasher, but...THERE WAS NO WAY IN HELL I WAS GOING TO BE WASHING EVERYTHING BY HAND! I mean, that would wreak havoc on my cuticles, and I HATE the smell of rubber so rubber gloves were not an option. As far as I saw it, I had no other choice... 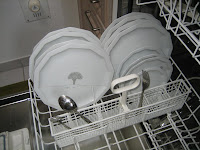 I loaded everything into the dishwasher, closed the door, and then proceeded to spend a rather nervous washing cycle hoping against hope that the fine china's first foray in its twenty year career into non-manual washing wouldn't result in disaster.

About forty minutes later, I opened the door, peered through the cloud of steam...

Perfect! I will NEVER wash the good china by hand again!

Most dishwashers have a china setting. I've always wondered who puts their china in the dishwasher. I'll try it from now on. Washing dishes is my worst household chore.

TSK - Yeah...I also noticed the china setting...after I had run the dishwasher. Oops! Even on the normal setting, they appeared to be totally fine. However, I was warned by a few people that the dishwasher will, with repeated use, eventually wear down the finish on the china.

i'm really jealous. Jen has a dispose-all, you have a dishwasher. grr face.

Did you "hope against hope and your whole family wishes that a childhood dream would come twue."

Jessica - Not only do we have a dishwasher, but I am also the self-proclaimed, greatest dishwasher loader of all time!

You rebel you. Yeah, the decor does wear off the fancy dishes if you put them in the dishwasher every time, but once in a while won't hurt.

And a message to Mrs. TBF: There's about 2 tsp of vanilla sugar in one of those little packages. Happy baking!

I can't tell whether the decorative motifs are painted on, but if they are - or if you have any plates with gold or silver trim - those will go really fast! Otherwise, why not? Using knives on china will also wear down the finish!

We don't have a dishwasher and yes it sucks to wash things by hand...