Not Just A Place To Sleep... 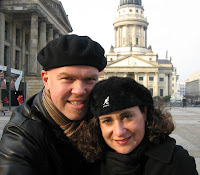 We wandered aimlessly around Berlin on Saturday afternoon popping into a few stores (including a store that sells these South African candles that we like), a Starbucks for a quick pick-me-up, and a bar/restaurant at Gendarmenmarkt for a quick drink. After I had a beer and Mrs. TBF had a glass of wine, we walked out into the square (where I took this self-portrait) and realized that we were both REALLY tired! It was time to head back to the hotel for a short nap.

After shaking out the cobwebs, we went down to the lobby to talk with the concierge about finding a place for dinner. We were in the mood for Asian, so the lady ended up recommending a place called Good Time. We requested that she make a 10:00 p.m. reservation, so we had a little time to kill before we had to leave and we decided to have a drink in the lobby.

This is the lobby of Hotel Adlon where we enjoyed our drinks (the picture is from their website).

Pretty nice, isn't it? I'm telling you, this was one of the nicest hotels we've stayed at; total L.O.L. (lap of luxury). The staff was really friendly, the service was great, the rooms were really well appointed...

Oh...and while I'm thinking about it, here's some unsolicited advice: Don't stay at a crappy hotel when you travel. It's not "just a place to sleep". One thing that really bothers me is when people skimp on their hotel when they travel. I've heard people say: "We're gone all day anyway..." That's a bunch of B.S.!! Unless you're just out of college and backpacking across Europe, or you're on an absolute bare-bones budget, then you shouldn't be staying in a hostel. I'd even go so far as to say that it's better to spend more money per trip on fewer trips than to take a bunch of trips and stay at 1-star hotels. You'll end up enjoying the sights, but then you'll just end up complaining about the hotel after you get home. Beg, borrow, or steal the money - I don't care. Life's short. If you're spending a little more money on your hotel than you think you should, then you're headed in the right direction. Just do it!

There! I've had my say. Tell us what you really think, right? 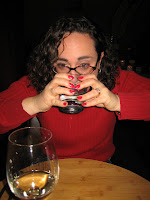 After our drinks we walked on nearly deserted streets (Where was everybody?) over to Good Time at Hausvogteiplatz. The food was great, although a bit spicy. I have to admit that we've become accustomed to food not being very heavily spiced in Switzerland. Yes, we've become wimps when it comes to spicy food, but the "heat" didn't keep us from eating it - ALL of it!

We sleep-walked back to the hotel with our tummies full of spicy food and climbed back into our extremely comfortable bed where we slept for 8.5 more hours. I pointed out to Mrs. TBF when we woke up in the morning that we had slept for twelve of the last twenty-four hours.

Have been meaning to get to Berlin... and now I know there's a Dunkin' Donuts!!... BTW- did you ever go to a place called "Winchell's Donuts" in Chicago? The best hands down.
And link me into your page Big Finn! - My Brand New Swiss Life...
So ya... When you have time, my Berlin questions may be comin your way! ;)

Love, love, LOVE the berets!! Mrs. TBF, I must find the same one for myself!

It's a great picture of you both.

MBNSL - I can't say that either one of us has ever been to a Winchells. Oh, and you've been added to my links.

TSK - I'm wearing a beret, but Mrs. TBF is actually wearing a hat (backwards). Oddly enough, we actually walked past a lady in Berlin who was wearing the exact same hat (the same way), and kind of gave Mrs. TBF the stink-eye as she passed.