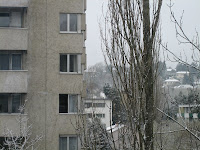 I took this picture from our kitchen window this morning at about 7:30 a.m. The outdoor temperature was 0˚C/32˚F, the wind was howling, and the snow was blowing. Yes, that is an open window you see in the lower left of the picture. This window is open EVERY morning around this time for about five minutes, and the scene is repeated many times over around Switzerland.

You might find it interesting to know that our rental contract stipulates that we are supposed to do the same thing during the cold months. Apparently, the concrete/steel/glass construction that is common in Switzerland lends itself to interior moisture build-up, and this can result in mold. Our property management company actually sent the residents a letter a few months ago which basically said that we are "required" to go around our apartment and open our windows for five minutes at a time each day in order to balance out the moisture.

Mrs. TBF and I often sleep with our bedroom window cracked open (it's rarely "Chicago" cold in Basel at night during the winter), and I consider that to be enough to allow the air to change in the apartment. I'll be damned if I'm going to go around the apartment opening the windows for five minutes at a time! And, I'm certainly not going to keep the windows open on a cold, blustery, and snowy day like to today - that's insane! Nope, not me. Today, I'm on complete lock-down!

So, other than the moisture issue, the other reason why the Swiss open their windows is that they love the frisch luft! Yup, Swissy loves him some fresh air! The colder, the better. Never mind the fact that we live in an urban area, there's a busy street right next to our building, and the "fresh" air is mixed with carbon monoxide, diesel particulants, and probably a multitude of other nasty things. I'm still not really sure how the Swiss are able to cope with the wind blowing into an open window for five minutes each day since they seem to have this strange belief that the wind is responsible for every ailment known to mankind.

Hey, what do I know? I'm sure Swissy has an explanation for that...like everything else. I guess "wind" and "fresh air" are two different things. Whatever...

The thing that really used to bother me was when I'd hear Swiss people complain about how much energy is wasted by "large American refrigerators". They'd usually complain (erroneously) about the fact that these refrigerators sit mostly empty (huh?) sucking energy day-in and day-out. Of course, the small Euro-refrigerators use so much less energy and are, therefore, so much better for the environment. Never mind that you have to go to the grocery store every single day because Euro-fridge only holds a day's worth of food, or you have to have several of them (we have three refrigerators and a chest freezer) to hold all your stuff.

Is opening your window every single day during the winter and letting all the heat escape really wasting less energy than having a big refrigerator?

What's the point of all this? Oh, I don't know...I guess I'm just saying that you do what you want to do, and I'll do what I want to do. Don't lecture me, and I won't lecture you.

I'm feeling better now having gotten that off my chest. I think I'll take a walk through our cozy (20˚C/45% relative humidity) apartment to the chest freezer and take out some kind of meat to defrost for dinner. Then, I'll go upstairs to the beer refrigerator and check the inventory to make sure that it's not mostly empty. After that, I'll come back downstairs and have me a little breakfast from the main refrigerator.

Back in the US, my house (rented out) has a little computer that controls the furnace. This allows you to set it so that it comes on in the morning when you're getting ready for work. It cools down after you leave for work, and when you come home it has the house warm again for you. Finally, it cools down again at night so you can sleep comfortably. It's great, and I always slept well with that in the house.

Now, just try to find such a setup here in CH. Nope, you've got these hot water radiators from the mid-1800s set up in most of the buildings. You've got settings from '1' to '5' and the Swiss usually have it set so that the temperature in the building is between 75-85 degrees fahrenheit. They don't change this temperature at all during the day. They don't have an incentive to, all too often as heating is included in the rent. Nope, if it's too hot in winter, they open the window.

Now, if the Swiss managed the building temperatures as well as the folks in my part of the US (Seattle) did, they'd be able to close down one or two of the nuclear plants that they're talking about building.

What really causes the moisture buildup is the lack of reasonable insulation and ventilation in Swiss buildings. Even with fairly low humidity (remember I'm from Seattle, where it's often 80-90% or higher in the winter), we get moisture on the windows. Running the ceiling fan for a bit in the morning takes care of this.

Feel free to discuss this matter in the future with your Swiss friends when they bring up the subject of big american refrigerators (which, BTW, are usually newer and more efficient than the ancient refrigerators in Swiss residences).

Oh, and wouldn't leaving the bathroom fan on for about five minutes accomplish the same result as opening the windows for five minutes?

There ya go, bucking the system and causing all sorts of trouble.

I wonder what the fine is for "failure to comply?"

Speaking of Chicago cold, I'm going there for the first time ever next week, and wondered what you might recommend as must-see. We love the blues, bbq, and cafes. Already thinking of the Field Museum, the Art Institute, and the Aquarium...tho with fees for all of them it'll be more $$ than I'm used to for visiting museums (living in DC area now). Also, we're staying at a hotel at Wacker and Michigan and won't have a car...Thanks for any suggestions, I love all your travel advice! P. S. Finally got blogger to actually work for leaving a comment...I hope!

I, for one, have NEVER encountered an "almost empty American fridge". Not even my Mom's is and she lives a) alone and b) is not a big eater.

We also have our bedroom and living room windows tipped at night and set the timer for the heating to low at night and during the day when we're at work. I know, however, that this isn't the standard in Swiss homes. I say: You don't need to do more than what you are doing right now.

Since I am now a pseudo-mold expert, I know that 45% humidity in the winter months will grow an entire attics worth of mold. Beware!

I wonder what Swissy would say about our nearly-empty fridge that sits inside our blazing hot garage working overtime to keep the beer inside cold all summer long.

Beej - I have to admit that I'm going to need some outside help on this one. First of all, I haven't lived in Chicagoland for nearly 7 years. Second...when I did live in Chicago, I rarely ventured into the city for dinner. I haven't been to a museum in Chicago for probably twenty years, I saw on aol (http://cityguide.aol.com/chicago) that Twin Anchors is rated as the top BBQ place by the voters - I was there in the late 80s. Buddy Guy's Legends (www.buddyguys.com) is considered a classic place for "white boys from the suburbs to go see the blues"... as a black friend of mine puts it, but I've never been there (www.buddyguys.com). I have been to Pizzeria Uno a few times (you have to try Chicgao-style pizza!) and I like it, but Mrs. TBF hates it. All of these places are a short taxi ride from where you'll be staying.
Sorry I can't be of more help. Maybe somebody else will have some suggestions.

TSK - A 40%-50% indoor humidity level is recommended by our landlord. The proper indoor humidity level is mostly based on the outdoor temperature, and it's not nearly as cold here as it is in Chicago. I seem to recall that our humidifier in our old house (which had to be adjusted according to the outdoor temperature) had a maximum setting of 30 or 35%, so yes...45% would be WAY too high in Chicago - especially if the temp. was way below freezing.

As for your neighbor's habit of opening the window every morning, I have a question.

Do beans figure prominently in the typical Swiss dinner?

Yeah, we didn't know about the proper winter setting. Ours was set to 45% year-round. Yikes! We were having a mold fiesta up there! We might have even seen the mold carousing if the frost in our attic wasn't so thick.

I believe Swissy thinks it's only warm winds that are responsible for everything from headaches to foreigners. Cold wind is very, very healthy!

Sal - I'm not sure about the Swiss, but I ended up having Mrs. TBF's leftover black bean soup that evening. Whoa!

TSK - The rule is pretty much: If you see condensation on your windows during the winter, then you should lower the humidifier.

USM - One time when it was about 95˚ outside, I got on the tram and opened a window because most of them were closed and it had to be 110˚ on the tram. An old man complained, and I told him that his window could remain closed, but my window was going to stay open. He GOT OFF THE TRAM at the next stop (muttering something in Swiss-German) and I saw him waiting for the next tram (in the breeze) as my tram pulled away. Freak!