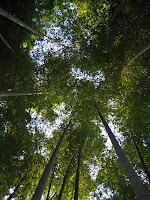 The sun was beginning to set as we made our way to one of the many Japanese gardens we saw during our two-week stay. After arriving at the garden, we climbed the stairs that were carved out of the hillside through the straight-as-arrow bamboo trees that reached upward to the sky. 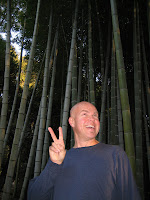 The Japanese kids always make a peace sign when they pose for a photo, so I decided to do the same. Then, Mrs. TBF handed the camera back to me so that I could take a picture of her... 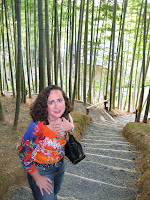 ...right after she saw the big "man-eating" spider and spider web that was right behind me that I was trying to shield from her view.

michael - I guess you're right, but I wrote that just to differentiate it from a vegetable garden - of which there are many dotting the Japanese landscape. Of course, why would we be going to a vegetable garden...right?