Messengers Of The Gods...

Way back when we were in Amalfi, Italy in September 2006, we ended up talking to a Japanese couple who were seated next to us at a restaurant. At some point, we told them that we were planning to go Japan the following year, and they told us that we just HAD to go to Nara. Going pretty much on their advice, we took a day trip to Nara while we were in Kyoto.

At first, as we walked along the commercial strip leading away from the train station, I have to admit that I was a little disappointed. It was just a bunch of shops and restaurants, and I was beginning to wonder what the bid deal was. Then, we came across an area of pagodas, temples, shrines, etc. Again, nothing that we hadn't already seen. We decided to slog on. That was when we saw the first...

...messenger of the gods!

That's apparently what the Japanese call the deer that roam around Nara's main temple area. They're all over the place. And let me tell ya, they're aggressive little buggers. 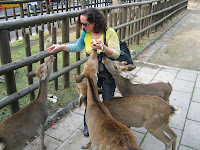 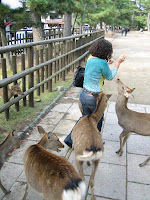 We made the mistake of buying a couple packs of deer "crackers" at one of the many stands selling them. And talk about a deer magnet! Suddenly, we were mobbed by these beasts. Messengers of the gods? HA! More like members of Satan's brood!

Everything was OK for about the first two seconds, but then the mood quickly changed. One of those little buggers bit Mrs. TBF in the butt because he didn't feel he was getting his fair share - I think it was the especially mean looking one with his mouth open in the second picture. And, when I was taking the pictures of Mrs. TBF getting attacked by these fleabags, one of them must have mistaken my crotch for deer feed because he nipped me about two inches away from the family jewels. 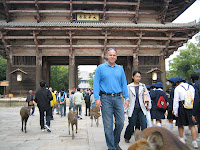 Yes, I'm not ashamed to admit that...we threw down our remaining cookies and...RAN...LIKE...SISSIES!!! Once the deer cookies were gone, then the stinkin' critters had absolutely no interest in us whatsoever.

After regaining our composure, we checked out some of the temples. However, they paled in comparison to the pure entertainment of watching from a distance as unsuspecting tourists bought packs of deer cookies, proceeded to be mauled by venison, and ran away shrieking while tossing deer cookies in the air.

So do you think that the Couple was playing a big practical joke on you?