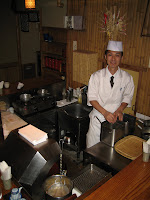 Here's my latest addition to..."The Official List Of Things I Want If I Ever Win The Lotto": my very own Japanese tempura chef.

Oh, and don't give me that crap about fried foods being unhealthy for you. I mean look at our tempura chef from our first night in Kyoto. Surely he makes tempura for himself a few times per week, and...HE'S TINY. I'm not saying he would be my very own "pocket tempura chef", but he would definitely fit into the 1-liter Ziploc bag that holds the liquids in my carry-on bag. If I had to venture a guess, I would put him at less than 5' tall and well under 100 lbs.

The tempura meal was great. The chef was in charge of cooking for about twelve people, and he somehow managed to keep straight what he was cooking for each person (with nothing written down), and managed to time the food so that everybody got everything in a well-paced manner. For example, he'd put some things that looked like fried grapes on our plate while saying "...gingko nuts". Then, he'd serve other people, throw more things into the copper vat of oil, walk out the little door located behind him in the picture and disappear for about a minute (to do god knows what) and eventually put a few more things on our plates that turned out to be "...some kind of mushroom".

"Some kind" of mushroom? What the heck does that mean? Poison mushrooms? Well, obviously not because I lived to tell the tale. Unless, that is, that they're poison mushrooms that cause a delayed....and sudden...

Email ThisBlogThis!Share to TwitterShare to FacebookShare to Pinterest
Labels: some kind of mushroom, tempura, things I want if I ever win the lottery