Sukiyaki may now be my favorite Japanese food. Yes, I love sushi. However, there's something wonderfully decadent about simmering assorted veggies and meat in stock and then dipping them in a beaten raw egg before eating it. Oh, and the absolute best part? A cube of fat is cut off of the beef and...left to dissolve in the broth before you begin eating. Be still my clogged-artery, beating heart!

We went for a late lunch to this GREAT sukiyaki place in the Asakusa area of Tokyo called Chin-ya. It's been around since 1880, so we figured that they'd know what they were doing.

Upon entering the restaurant, we were greeted by a man who spoke absolutely ZERO English, but managed to communicate with us by rambling in Japanese, pointing to things, and charades. We took off our shoes, pointed to sukiyaki on a sign that was written in English, and then were ushered to an elevator. When we got out of the elevator, a lady in a kimono greeted us and brought us to our own little private room for our meal.

The lady in the kimono seemed to speak some English, but the fluency of her English was very misleading. I find this to be the case in many countries when we're traveling. As long as we stuck to "the script", there was no problem. "Hot tea, o' cord?" she asked. "Hot..." we replied. No problem... However, if I would have asked her something like "How many cups of tea do you serve during a typical day?" it would have been met with a blank stare. 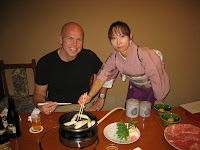 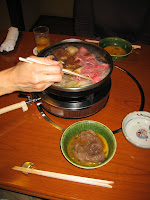 The lady got our meal started for us, showed us what to do, and then handed me a laminated piece of paper with instructions to use the phone in our room to let them know if we needed anything. This was a fairly common practice throughout Japan in places when people didn't speak English. We'd be handed a piece of paper with something written in English, and then we'd just point at our choice (i.e. SPICY or NOT SPICY). The stock thickened, the meat and veggies cooked, we dipped, and we ate. It was nirvana. 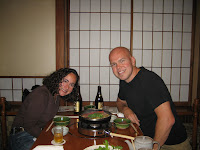 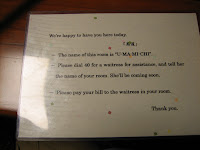 When we were done, I picked up the phone, listened as somebody said something in Japanese, then I blurted out "U-MA-MI-CHI...," and the kimono-lady showed up at our door seconds later...bowing. There was a little brochure in our room containing information about the restaurant, and it also had a little section with English phrases translated into Japanese. So, I gave it a whirl:

Gochiso-sama Deshita. Kaikei O Shite Kudasai.
(I have enjoyed my dinner. Please let me have the bill.)

The kimono-lady, much to my surprise, seemed to understand me because I had the bill in front of me a few seconds later.

We were walking out of the restaurant a few moments later to a chorus of staff saying things to us in Japanese while bowing. And then we were back on the streets of Tokyo feeling all warm and fuzzy inside.
Posted by The Big Finn at 11/08/2007 04:30:00 AM

You do NOT want to know what I thought Sukiyaki was!

LOL. Maybe you said something wrong (thanks to our "great" pronounciation of Japanese)and she just wanted you to leave?

And why am I reading this just before dinner. Can you hear my stomach growl?