We decided to take a day trip from Kyoto to Hiroshima; only a couple of hours away by train. It was a little rainy when we left Kyoto, so we brought our umbrellas. And, naturally, since we committed to carrying our um-ba-rellas-ellas-ellas all day, that meant that the Hiroshima weather was sunny and pleasant. As a matter of fact, the weather probably wasn't too different from how it was just over sixty years ago when Hiroshima was... 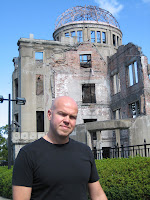 It was pretty amazing arriving in a thriving, bustling metropolis that was just ashes and rubble not too long before we were born. From the main train station, we took the tram to the A-Bomb Dome stop, which is close to the Peace Memorial Park and Museum.

I have to say that the museum is done pretty well. I went in feeling that the tone would be somewhat anti-American, but it wasn't at all. It seems that the museum presents things in a well-balanced manner with the goal of bringing understanding to the whole fiasco in hopes of avoiding a repeat...anywhere.

After spending an hour or so in the museum, we walked through the park, took the tram back to the train station, and then we took the train back to Kyoto. All in all, we were in Hiroshima for only a few hours...which was enough. 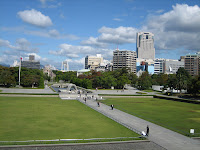 Overall, Hiroshima didn't impact me the way I thought it would. It all seemed kind of sterile and textbook-like to me. Maybe it has something to do with the fact that none of my relatives ever fought in WWII, I don't know. However, I think it had more of an impact on Mrs. TBF than it did me.

Email ThisBlogThis!Share to TwitterShare to FacebookShare to Pinterest
Labels: Hiroshima, not the emotional impact I was expecting, Peace Memorial Park