We decided to celebrate our anniversary by going out for some Kobe beef at a local teppanyaki grill - unfortunately, the name of which eludes me at this time. Well, whatever it was called, I'd highly recommend it; friendly staff, businessmen dining with what appeared to be high-priced call girls, and awesome, AWESOME food!

Updated later: the name of the restaurant is Mikaku. 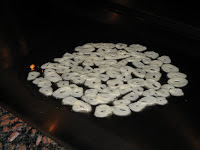 First, the chef asked us if garlic was OK. We told him it was, and he grilled up a bunch of surgically-sliced garlic chips for us. Fortunately, both of us were eating the garlic. If it had been just me eating it, Mrs. TBF would probably have made me go sleep in the ice machine room. 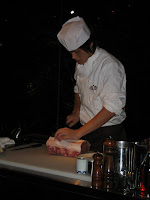 Then, we ordered the beef, and the chef sliced off a big slab for us. Next time, I'll warn him that I'm taking the picture because the flash went off right when he was slicing and he kind of looked up with a...um...not-to-happy expression on his face. Sorry! I think I almost caused him to slice off his finger. 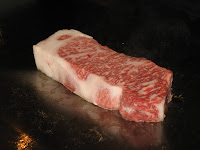 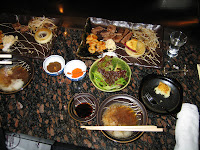 But no harm done, because (after being weighed to make sure we weren't being cheated) the beautifully marbled hunk o' heaven was sizzling on the grill a few minutes later, and was sliced up on our plates a few minutes after that.

Oh, and the best part for me? The chef didn't waste the fat. He actually cubed it up, fried it up like bacon, and then mixed it with some bean sprouts. The memory of it makes me weep!

Add a Kobe beef chef to the list of things I want if we ever win the lottery!

When we were finally finished with the meal, we walked out to the typical chorus of staff saying stuff to us in Japanese while bowing. Outside of the restaurant, I stopped to take a self-portrait of us... 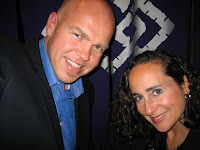 Email ThisBlogThis!Share to TwitterShare to FacebookShare to Pinterest
Labels: garlic chips, hunk o' heaven, Kobe beef, not wasting the fat, things I want if I ever win the lottery

Very nice meal! But I must say I'm always impressed by your self portraits!

et - I owe it all to a steady hand AND our quik pod. You can check it out for yourself at www.quikpod.com. I'm pretty sure that it was Michael who originally told me about it. Thanks, Michael.