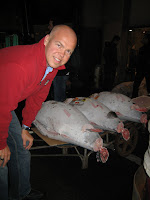 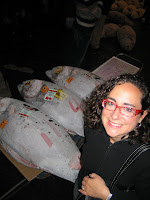 Now that I think about it, we really didn't sleep very long that first night. As a matter of fact, we got up at 4 a.m. because we wanted to go to the famous fish market and see the tuna auctions.

You got that right, folks...

The alarm went off at 4 a.m., we actually got out of bed, managed to pull on some clothes, got in a taxi, and made it to the Tokyo fish market by 5 a.m. Will miracles ever cease???

We had read in the guidebooks that the tuna auctions had been closed to the public some time back, so we just figured we'd walk around, check out the early morning chaos of the market, and then head off for a sushi breakfast. And wander around we did.

We wandered through what seemed like mile after mile of fish stalls with people whizzing around on little propane powered carts all over the place. We were constantly trying to stay out of the way of the workers, but we just kept on walking past tons of seafood on ice; many types of which we had never seen before. Surprisingly, there's not really a strong smell of fish. Instead, I would just describe the market as smelling like the ocean.

So, just as we were getting tired of walking around and thinking about going for our sushi breakfast, we noticed people walking through a doorway in the distance. We decided to check it out, and we discovered that we had stumbled (by chance) into the tuna auctions. As it turns out, they're not closed to the public at all. There was a roped off area filled with tourists taking pictures and shooting videos.

So much for the guidebooks! 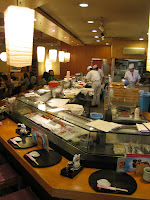 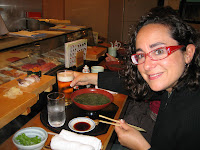 We watched the auction for about fifteen minutes, took a short video, and then took a few pictures of us standing next to frozen tuna. At that point, we began listening to our stomachs telling us that it was time for breakfast and decided that we had seen enough of the market. We zigzagged our way through the stalls and back out onto the street where we quickly found a suitable looking sushi restaurant that was filling up quickly.

I have fond memories of wandering around the market, being completely lost, and nearly getting killed at least 25 times by those carts. We were also lucky enough to find the tuna auction (fresh, not frozen) completely by accident, but just couldn't bring ourselves to eat sushi at such an ungodly hour.

I'm also impressed that you actually tried out the toilet gadgetry...I was way too frightened at what might happen if I touched the wrong button.

It looks like a fab time! However, I'm not sure I could have kept up with the sushi, though. I love it, but it doesn't like me :(

kirk - Sometimes you just have to go for broke!