Tokyo's subway system is amazing. Yes, it's busy and crowded. However, it is incredibly clean and orderly. Unlike the Swiss, the Japanese actually know how to form a line. There are lines on the subway and train platforms marking where doors will open, and the people actually line up behind these lines, wait for the people to file out of the car, and then file into the cars in an orderly fashion. Once inside the cars, it's nap time! 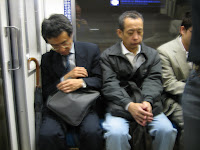 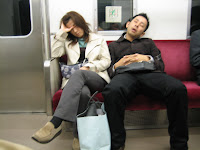 I've never seen anything like it. Once the subway begins to move, the heads begin to nod. Scenes like these were played over many times during our trip.

People would fall asleep sitting upright, with their heads on their neighbors' shoulders, or even standing up. Seriously! We would see people fall asleep standing up!!! The head would nod, and a few seconds later the person would be stumbling backwards into another passenger wondering what had just happened.

However, the most amazing thing about it all was that people would fall into what appeared to be the deepest coma in the history of sleepdom for minutes at a time, and then they'd...wake up seconds before they reached their stop and just jump off the subway car as if they had been woken up by some built-in alarm clock. 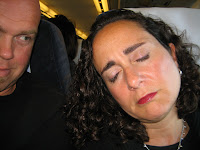 I would LOVE to see orderly queues in/off of the El!

oh yeah and standing on the right going up the escalator so others can walk on the left, whadda concept!

You said it, mate. The Swiss will often not even leave you space to get out of a darn tram! Shouldn't this just be part of their politeness scheme they use everywhere else?