I found English was not very widely spoken in Japan. Correct that..."good" English. Of course, the staff at hotels would speak it pretty well. However, out in the general public? Ummmm...no. 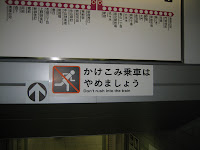 For the most part, important signs are written in both Japanese and English, so I avoided the "rushing into the train" faux pas and all the shame that it would have brought to my forefathers.

Overall, people (i.e. Japan Rail employees, waitresses, taxi drivers) would speak just enough Engrish so that we could communicate. I think I only had to use my Japanese phrasebook once, and I don't think the person had the slightest clue what I was saying, so I just repeated it in English. Oh...and I did have to say Hyatt-oh to the taxi drivers in Kyoto so that they would actually drive us to our hotel. If I just said "Hyatt Regency"...no clue!

The mixing up of the "l" and "r" is just like you'd see on a TV comedy where a Japanese person was butchering the English language. And, it took some getting used to because we're not used to hearing it. We were consistently asked if we wanted "remon" or "rime" with our water - that wasn't too hard to decipher. But there were times when we would be asked something, and I would have absolutely no clue what the person had said. At that point, I would just look over to Mrs. TBF and hope that she had managed to make heads or tairs out of it all. For example:

...bought a couple of great Japanese knives and whetstone at a store in Kyoto.

...store employee demonstrated, while giving instructions in English, how the knives should be sharpened.

...gonna have to Google it because I only understood about half of what she was saying to me, and I didn't want to be rude by asking her to repeat things.

Overall, we managed fine. The Japanese are incredibly friendly, hospitable, service-oriented people. We didn't have even one bad experience the whole time we were there. 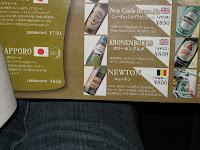 Could somebody please explain to me why nobody spoke more than three words of English at...AN ENGLISH PUB IN TOKYO????

Why is New Castle Brown Ale listed as "Doggy Beer"?

When did the Kronenbourg brewery move from France to England?

NOTE: Mrs. TBF is embarrassed. She wants me to point out that we stopped at the English pub just for a quick beer (we actually ordered Kirin on draft). We don't make a habit of stopping at English pubs when we travel (except for when we're in England, of course).
Posted by The Big Finn at 11/02/2007 02:45:00 AM

Email ThisBlogThis!Share to TwitterShare to FacebookShare to Pinterest
Labels: English pub in Tokyo, getting by with Engrish, mixing up L and R

It's not limited to spoken English...we saw this sign when we were in Kyoto:
http://expatter.blogspot.com/2005/03/cultural-insensitivity.html

I really had to laugh once when I asked for directions at a hotel (!!) and they sent me totally somewhere else.... because they didn't understand ME! "One does not leave a question unanswered, even if the answer is wrong" sure is their motto. I'm starting to ask myself who did not understand who!