With the exception of North America, the Nordic countries, Holland, and maybe Germany, I'm viewed as being pretty big. In Japan, I think I would probably be categorized somewhere in the circus freak category.

Nobody asked to have their picture taken with me or anything like that, but I definitely had the feeling that I was being watched...and stared at. I was stared at by:

...infants who would point at me and then bury their heads in their parents' legs.

...school children who would wave at me and shout out "HELLO!" while walking by.

...senior citizens who had now seen the human Godzilla and could die in peace knowing they had seen it all.

My question is: Am I really that big? Or... Are the Japanese just really small? Maybe, it's a combination of both. 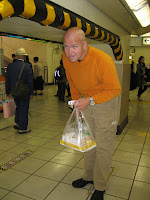 I mean, come on! This is ridiculous. Right? Although, I noticed Japanese people walking under it (at Ueno train station in Tokyo) without even ducking. I avoided hitting my head this time, but I could have used a warning in a few dozen other places around Japan to avoid bumpin' the old noggin. 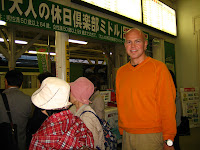 Then, this picture at Nikko train station. I'm 6'5" (about 195 cm). What are these people, four feet tall? I think they'd fit into my carry-on bag.

We determined that we could TOTALLY live in Japan - we liked it that much! However, if we did, I'm sure I'd have a hard time finding clothes in my size. For example, Mrs. TBF and I went into a Lacoste store, and the largest shirt size they had was a size 3 - I wear a size 7 Lacoste shirt (just in case you're planning on buying something for me for Christmas).

Email ThisBlogThis!Share to TwitterShare to FacebookShare to Pinterest
Labels: it's not easy being big, scaring Japanese infants, trying to avoid bumping my head in Japan

TBF, you really are that big. And they really are that small. I decided I had to buy one of those t-shirts with nonsensical "Engrish" slogans that so many young people wear there, and I ended up having to get the biggest size they had and it was still, shall we say, "form-fitting". I'm not sure you'd even be able to get it over your head...

It's probably similar to Singapore... I was told I'd have to buy Large there! How depressing!

Too funny. I sometimes feel that way here in France, and I'm not even that tall! But all the woman are about half my size (height & weight-wise), and there are times where I just feel like this big looming giant, especially if I'm wearing heels.

You do look a bit giant like in that first photo ducking down...

I'm sure I'd have trouble finding clothing too!

Whoaaah! I need to get Mr. M to Japan just for the commotion it would cause. He's about 193 and is always having to watch his head.

TSK - Yeah, but you have to remember that people wear their clothes looser in America than they do in Europe and Asia. You would definitely be a medium in Europe.

Samantha - Before I lost weight, I once tried on a pair of XXL pants at Géant Casino, and I couldn't get them over my hips.

You had to go all the way to Japan to figure out that you look like a circus freak?