Not To Rub It In Or Anything... 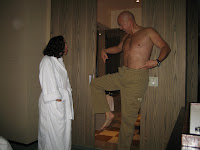 ...but at least the suitcase that DID arrive had a clean pair of pants...for me!

Only one out of two bags arrived with our flight to Tokyo. We had split up our clothes between the two bags just in case this happened, but, for whatever reason, Mrs. TBF had not planned properly. You know what I mean? One of those things where you end up with a bunch of socks, underwear, and shirts, but no "smart casual" clothes for dinner, and no other pants to change into.

Between having done a better job of separating my clothes AND the advanced Japanese toilet technology, I was FRESH as a DAISY!

I'm not really sure why, but the lady who took our information at the British Airways lost baggage counter just handed Mrs. TBF a Citibank card with 200 Pounds loaded into it for all our troubles. I mean, Mrs. TBF didn't even ask for it; the lady just gave it to her. Nice! After going through customs, we just walked to a bank machine, inserted the card, and got something like 45,000 yen. Sa-WEEEEET.

The bag ended up coming a couple of days later, so it wasn't too bad. We just got by using the hotel laundry service.

Oh, and speaking of laundry... 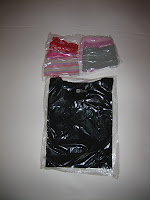 Why is it that dry cleaning/laundry at A HOTEL in Tokyo costs about the same as a dry cleaner in Basel? Plus, the laundry is done in a matter of hours rather than a week, AND it's folded nicely with tissue on the inside of shirts, AND it's wrapped up all nice and neat in a plastic bag. Yes, that's Mrs. TBF's underwear. I'm sure she'll be happy about this picture...NOT!

GOD...I LOVED the laundry service! If we ever go back to Japan again, I might just bring my entire wardrobe and have it laundered at a hotel.

Why are taxis in Japan one-third the cost of taxis in Switzerland? Huh? HUH? Plus, the passenger door is opened automatically by the uniformed driver (including hat and white gloves), AND the seats are covered in a white lace fabric.